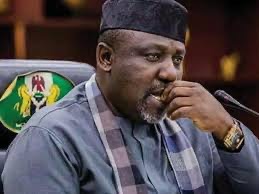 A FEDERAL High Court in Abuja on Wednesday declined an application by former Imo State Governor Rochas Okorocha asking it to restrain the Imo State Government and the Economic and Financial Crimes Commission (EFCC) from confiscating his property.

Okorocha who is entangled in corruption allegations by the Imo State Government had sought an interim order from the court while it was on vacation.

At the hearing on Wednesday, counsel to Senator Okorocha, Mr Oba Maduabuchi (SAN), told the court presided over by Justice Ahmed Mohammed that the property of his client were being marked for confiscation and demolition.

He prayed the court to issue an interim order to the EFCC and the Imo State Government not to carry on with their action.

The application, however, could not go through following a motion by the counsels to the Imo government and the EFCC challenging the jurisdiction of the court to sit on the matter during the vacation period.

In their separate submissions, they described the application by Okorocha as an abuse of judicial processes and cannot subsist in view of the motion filed already challenging the jurisdiction of the court to hear the matter during the vacation period of the court.

They argued that once an issue of jurisdiction is raised in any suit, it must be determined and resolved first before the court can take further steps.

According to him, he had filed a notice of preliminary objection challenging the jurisdiction of the judge to have the matter fixed during the vacation, because the plaintiff did not comply with the mandatory provisions of Order 46 Rule 5 of the Federal High Court Civil Procedure Rules, 2019, which mandates the plaintiff to obtain a fiat from the chief judge for the matter to be heard during vacation.

In his judgment, Justice Ahmed Mohammed refused to grant Okorocha’s application on the ground that he would first have to hear the motion challenging his jurisdiction to sit on the matter during vacation.

He adjourned the matter to August 24.

A State High Court in Owerri had earlier (on Monday) ordered the final and absolute forfeiture of Royal Palm Springs Hotel and other properties said to belong to Senator Okorocha and other members of his family.

According to a ruling by Justice Fred Njemanze, who was sitting as a vacation judge, Okorocha’s counsel failed to give concrete and verifiable reasons why a final and absolute forfeiture order should not be given in favour of the Imo state government.

Justice Njemanze added that the suit filed against the state government by Okorocha’s counsel was not properly filed.

He also described it as a ‘surplusage’, a term in law which means a statement completely irrelevant to a matter.

As for persons who might have made purchases on such properties, Justice Njamanze said they are at liberty to approach the court to prove their titles. (Channels TV)