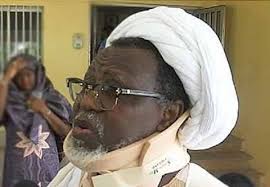 Kaduna State High Court presided over by Justice Gideon Kurada on Thursday adjourned the trial of the leader of the Islamic Movement in Nigeria, otherwise known as ‘Shi,’ite’, Sheikh Ibraheem El-Zakzaky, and wife, Zeenat, till January 25 and 26, 2020 for further hearing.

The court adjourned after the six witnesses called by the prosecution counsel led by Dari Bayero, testified before it.

Eight counts bordering on culpable homicide, unlawful assembly, disruption of public peace, among others were filed against the IMN leader and his wife by the Kaduna State Government.

At the resumption of hearing on Thursday, a former director from the State Security Service was among the four witnesses called, while others were Zakzaky’s neighbours at Gyallesu in Zaria.

According to Femi Falana (SAN), who spoke to newsmen shortly after a visit to the Kaduna Correctional centre, the testimonies were given in secret, noting that the prosecution called four witnesses.

Falana said, “Prosecution called four witnesses today – a retired director of SSS and three other witnesses who are neighbours of our clients.”