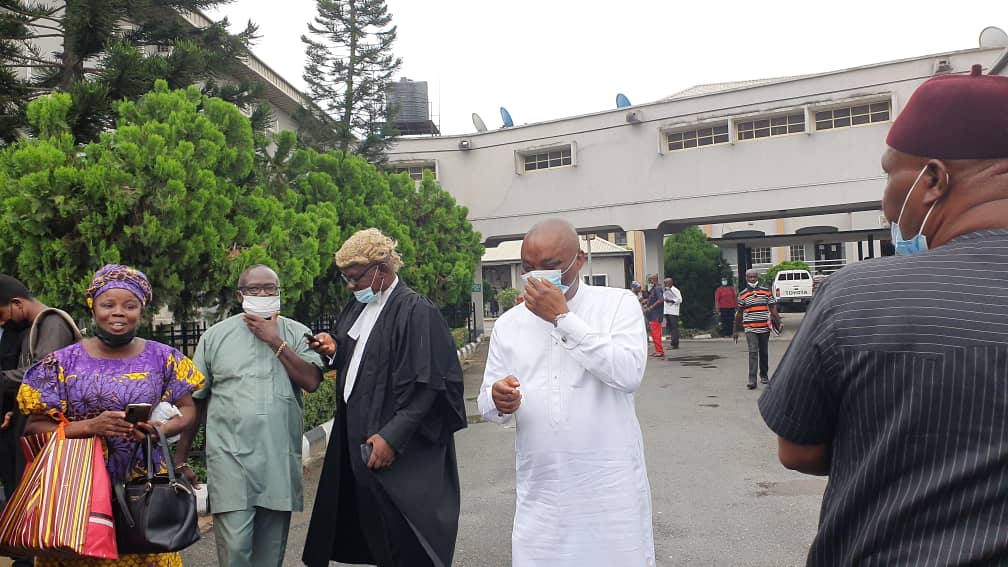 Aneke held that the case of the prosecution collapsed when it failed to call vital witnesses and lead concrete evidences to prove and establish its allegations.

Nwaoboshi, a Senator representing Delta North,  was arraigned in 2018,  by the Economic and Financial Crimes Commission (EFCC), on two counts of money laundering.

He had pleaded not guilty to the charges and was granted bail.

Trial commenced before Justice Mohammed Idris on April 25, 2015 but following the elevation of Idris to the Court of Appeal in June 2018, the case began afresh on Oct. 5, 2018 before Justice Aneke.

The EFCC said that Nwaoboshi committed the offences between May and June 2014, in Lagos.

He was said to have acquired a property described as Guinea House, Marine Road, in Apapa Lagos, for the sum of N805million.

The prosecution said that he reasonably ought to have known that  N322million out of the purchase sum formed part of proceeds of an unlawful act.

The sum was said to have been transferred to the vendors by order of  Suiming Electrical Ltd.

Delivering judgement on Friday, Justice Aneke first, read out counts of the charge for which the defendants were charged, and then reviewed  evidences as tendered by witnesses, as well as evaluated essential  ingredients of the counts.

“Pw 2 , Abubakar he works with Nexim bank and the summary of his evidence was that the sum of N1.2 billon was granted to the third defendant on his application for a period of five years with interest

“That the capital which is N1.2 billion has been repayed, while over N700 million interest has been paid and that only about N24 million is outstanding on the said loan

“He said that at the time of his testimony the tenure of the loan had not expired; the conclusion of his evidence was that the loan was regularly and properly granted to the defendant; he tendered exhibit A1 to A 27,”  he said

Moreso, Aneke held that Pw3 one Eyitayo Moigbemtere who sought to tender a computer generated statement of account, was rejected on grounds that it did not  comply with  section 84 of the evidence Act.

The court held that although the evidence of Pw3  was not controverted, the inadmissibility of the account opening document, makes it impossible for the charge to be proved

“PW 4, Mc Davies Stanley, an investigating  officer with the EFCC, investigated the case on receipt of a petition written by Pw1

“All he did was to write letter to several organisations and agencies and on getting their responses he analysed them and wrote a report which he submitted to the legal department of the EFCC.

The court held that exhibit G which is the extra Judicial statement of the first defendant is useless and cannot be tendered as evidence before the court.

“In criminal law, an extra Judicial statement of  a person charged with a crime can be used as a confession, if he agrees that he committed the crime or for impeaching his credit

“An extra Judicial statement which does not amount to a confession can never be regarded as evidence of a person charged with a crime,” he said

The court held that apart from the first element of the offence charged in count one which has not been proved is that the first and second defendant acquired Guinea House marine road Apapa Lagos, none of the other ingredients has been proved

“How can they be proved when the statement of account of the third defendant with zenith bank was tendered and.rejected in evidence,” the court queried

Justice Aneke consequently, held that none of the elements of count one has been proved adding that this failure collapsed the case of the prosecution.

“In count two, the ingredients of count one must first be proved before the defendant can be found guilty

“The result is that the prosecution’s case is dismissed and all the defendant are discharged and acquitted,” the court held

The defence called no witnesses but rather rested its case on that of the prosecution.