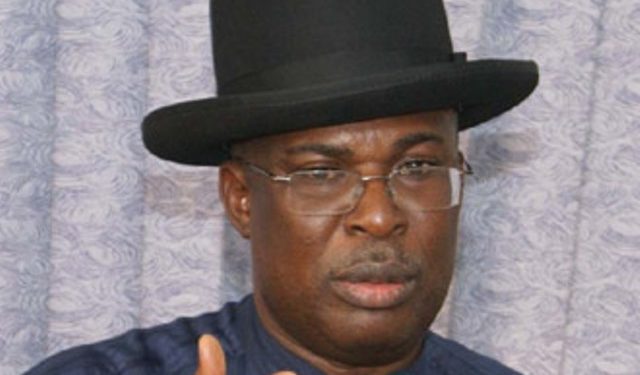 Minister of State for Petroleum, Chief Timipre Sylva, has denied any involvement in the protest that rocked the Abuja residence of Justice Mary Odili following the judgement of the Supreme Court that nullified the governorship victory of the All Progressives Congress (APC) in Bayelsa State.

Sylva lampooned Rivers Governor  Nyesom Wike for alleging that he and the National Chairman of the APC Comrade Adams Oshiomhole were behind the protests.

Describing the claims of Wike as outright falsehood, Sylva reasoned that the Rivers Governor could have organised the protests to blackmail the APC leadership before the Supreme Court knowing that the APC was prepared to approach the court for a review.

Sylva, a former governor of Bayelsa State, said Wike’s allegations amounted to adding salt to an injury adding that he had been so numbed since the judgement was passed that the only thing he could think about was to approach the court for a review.

Sylva, in the statement he personally signed, said: “I returned February 19th, 2020, from an official engagement abroad to read Governor Nyesom Wike’s statement to the effect that Comrade Adams Oshiomhole and I are responsible for protests in front of Governor Peter and Justice Mary Odili’s house.

“There is no truth in that strange claim. Governor Wike should know in what high esteem I hold Governor Peter and Justice (Mrs) Odili whom I have known and worked with long before Governor Wike came into the picture. It will not occur to me to malign the person and image of people I hold up as role models.

“I hope Governor Wike or those working with him have not organized this protest with the intention of hanging it on our neck. To incense the Supreme Court towards us, knowing that we intend to approach the Supreme Court again.

“What Governor Wike is doing is akin to deciding a matter bordering on criminality by way of Originating Summons where the issues have not been investigated and the accused given an opportunity to defend himself. Why will a Governor hasten to conclusions? If this is not adding salt to injury, what is?

“I have been so numbed by the events of February 13th that I could not even contemplate any other course of action than to approach the Supreme Court again. I am a man of peace and would not support any action that can cause a breach of the peace.

“I have had several encounters with the Supreme Court of Nigeria since 2012. I have never, at any time, attempted to protest their judgment. You know how difficult it is for an old dog to learn new tricks. Why will I now?

“On the issue of securing Governor Peter and Justice (Mrs.) Mary Odili, I have this to say: Governor Wike as Governor of Rivers State has the duty to protect all Rivers people including the Odilis. I hope he has lived up to this duty creditably. It is for Rivers people to judge.  As for the threat to me, ultimately it is God that secures not man or even a Governor.

“Let me conclude with these words for Governor Wike: ‘Those whose palm kernels were cracked by the gods should not forget to be humble’.”