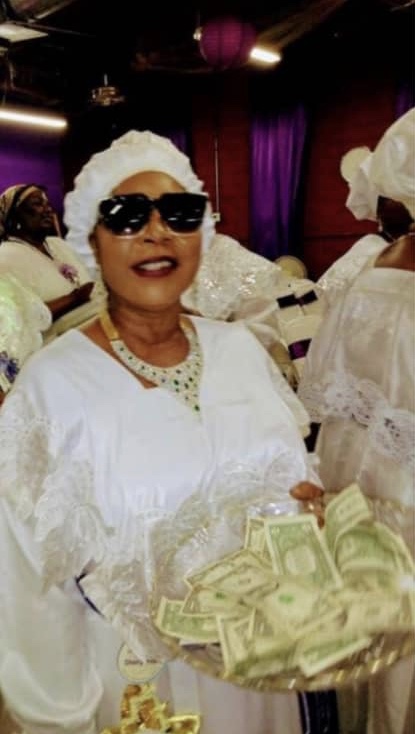 Popular and controversial Celestial Church prophetess, Funmilayo Adebayo, popularly known as Iya English is facing the toughest battle of her life as there are reports that she might be deported from her base in the United States of America.

Information from California, where she resides, has it that Iya English has committed several atrocities and that nemesis is catching up with her.

A very reliable source informed us of how Iya English is running from one Celestial Church to another with no solution to her application for asylum, which she filed with America’s Homeland Security to save her from imminent deportation.

A top Celestial parishoner in Los Angeles, who preferred anonymity, said; ‘Iya English is simply a devilish woman that can hardly get favour from God, except she changes her ways.’

He added that the woman was excommunicated in many parishes in the past due to her excesses.

It was gathered that few years ago, Iya English and the Parish Head of Trinity Terbanacle, in Lagos, Owatunde Marshal had altercation over an allegation that the Prophetess had a hand in the death of a fellow church member.

Shortly after the incident, Iya English reportedly left Nigeria for America, where she claimed asylum saying that she was a widow that was being persecuted at home over inheritance.

Report has it that this was later discovered to be a hoax.

While in the US, Iya English, who is said to be known for her deficiency in English Language, joined Goodness and Mercy Parish of Celestial Church of Christ in Oakland and was reportedly sent away after some months over allegation of causing disaffection in the church with fake prophecies.

We gathered that the woman later joined another parish in San Diego, where she was equally sent packing when she allegedly demanded to be paid fifty percent of the tithes because according to her, she was a ‘super woman of spirit.’

It was the disagreement that reportedly forced her to relocate to Los Angeles and joined Hisbah Beulah Parish and like a leopard that can never change its spots, another trouble ensued in form of a fight for all between Iya English and the wife of the Head of the parish.

Perhaps the last straw that broke the camel’s back was when Iya English was summarily dismissed from her job as a healthcare assistant over inconsistent documentation with immigration details.

At the moment, Iya English is not only fighting for her life, her grandson, Ahmed Adesina whom she helped to the US, has also been declared wanted for an alleged murder as a cultist in Moshood Abiola Polytechnic, Abeokuta, Ogun State.

Ahmed was reportedly helped to procure an American visa as a son of a popular monarch in Osun State, while investigations into the murder case was on.

All these are said to be working against the woman, who is said to be running from pillar to post to secure documents for asylum.

News of the People

Sanwo-Olu Felicitates With Dele Momodu At 60