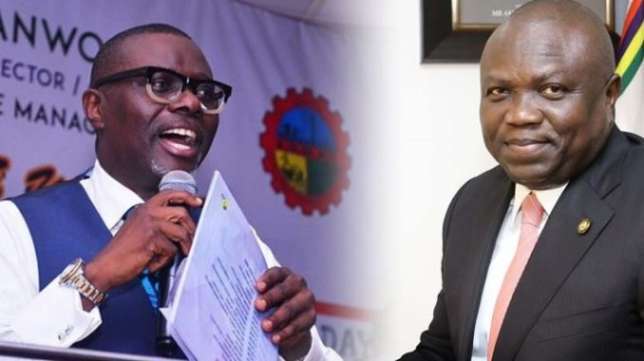 The head of the electoral panel set up by the APC to conduct the governorship primary in Lagos has said no primary was held in the state on Tuesday.

This is despite thousands of party members in Lagos turning up in various wards to vote for their preferred candidate between incumbent governor Akinwunmi Ambode and challenger Babajide Sanwo-Olu.

Mr Sanwo-Olu enjoys the support of majority of the APC leaders in the state including ex-governor Bola Tinubu.

On Tuesday morning, some of Mr Ambode’s supporters cried out they were being disenfranchised from voting amidst reports of thug attacks in some wards.

Clement Ebiri later said on the phone that he was not aware any primary held as all election materials brought from Abuja were still intact.

Mr Ebiri, appointed by the APC headquarters to oversee the Lagos governorship primary, said his committee was yet to commence the process.

He said he was aware that some people “have done something” which, he said, was not with consent of the committee.

The national spokesperson of the APC, Yekini Nabena, had earlier said he was not aware of the cancellation of Tuesday’s primaries.
Mr Ebiri, a former Cross River governor, later confirmed the primaries did not hold.

“Well, they said they were holding something, I didn’t know about it because we are busy crosschecking the architecture for it. So I am not quite aware of that,” Mr Ebiri said.

He said his committee was just concluding meetings with relevant stakeholders, after which materials will be shared for the election expected to hold Wednesday morning.

“We are trying to see if we can do an early one tomorrow. We now have all the parties present. They came. We just finished the meeting now,” he said.

Asked if he ordered for the reported elections in parts of the state, he replied: “No, no, no that wasn’t…we need to tidy up things properly. We need to.”

He also said he did not know the source of the materials used for the elections as those given to his committee were still intact.

Mr Ebri had earlier echoed a similar statement at a press conference in Lagos Tuesday afternoon.

At the press conference, he said representatives of both governorship aspirants failed to furnish the committee with the list of their election monitors.

“Yesterday we were told to adjust our modalities to suit the open ballot that the state is clamouring for and we told them that for us to do that, both parties will present a list of representatives from all wards that would represent them in the election and it wasn’t provided,” Mr Ebri said while responding to a question on whether Tuesday’s primaries had been cancelled.

“Anything that was done without the list we waited for, I can’t wait for a list for over nine hours and I didn’t see anything and you expect me to go ahead? We had a meeting with the representatives of the aspirants as early as 8am and we told them to bring lists of representatives from each LG to monitor the election on their behalf. I got names for 20 LG reps from one side and only got seven from the other side and we just got for additional eleven LG from them.

“And you don’t expect us to go on with an election where one person is represented and the other is not. I believe what we have decided is the best. There was no election and we will communicate when materials for the election will be distributed and election conducted.”

Earlier, while addressing the media, Mr Ebri said the NWC had been “dotting their i’s and crossing their t’s to ensure that the victory that will be procured at the end of the day will be celebrated by both parties.

“Because there are two major contenders in the primary election, they needed to take their time to prepare well in other to ensure that they were fair to both parties.”

I won’t give up on my stolen mandate, says Adeleke