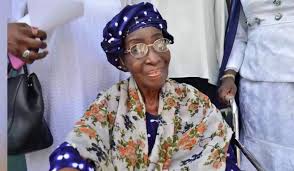 The Chairman, Board of Trustees of USOSA, Mrs Aisha Muhammed-Oyebode, described the death of Coker as not only a loss to the students body, past and present of Queen’s College, but to the country as a whole.
Coker died on December 23, 2019 at the age of 95 years.

USOSA is an incorporated body and public trust to advance the objectives of national unity and development through quality access to education in Nigeria.

It comprises former Alumni and graduates of the Federal Government Colleges, also known as Unity Schools, with 104 schools all over Nigeria.

Muhammed-Oyebode said: “Coker was an epitome of what an educationist, a teacher and a leader par excellence, should be.

“She loved and inspired all of us, her students, and lived by the values she taught us.

“I am honoured to have been a student when Coker was the Principal of Queen’s College, Yaba.

“Coker’s name would go down in history as one of the best Nigeria has ever produced in the education sector.”

Muhammed-Oyebode said that when the Federal Government designated Queen’s College as the first Government College for Girls, Coker blazed the trail.

“Coker set the standard for what would become the ethos of all Federal Government Colleges as symbols of national unity.

“The death of this patriot is a big loss, not only to her family and to us, her former students, but also to our nation, Nigeria,” she said.

Muhammed-Oyebode, also an alumnus of the College, said that the next Queen’s College Old Students General Meeting slated for January 19, would be dedicated to honour Coker’s memory and thanksgiving celebration.

“I am calling on USOSANs’ to attend and honour this great Nigerian,” she said.

Series of events had been slated in honour of the deceased.