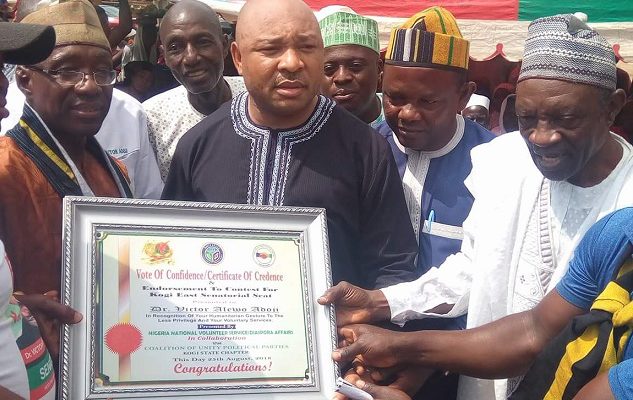 Kogi East Senatorial District Aspirant in Kogi State, Victor Adoji, says the nod given to him by the National Working Committee of the PDP to contest for the ticket of the party is a nod to begin his match to the upper chamber of the National Assembly.

Mr Adoji stated this in a chat with newsmen shortly after he received the certificate of clearance given him by the PDP to aspire for the ticket of the party in Kogi East.

The aspirant described the nod given him as the beginning of a journey to offer quality representation, says the clearance is an impetus to offer a representation that is unusual.

While he commended the PDP for it due diligence on all its aspirants, he said he remains one with an unblemished track records of service, assuring that under his representation the Igala Bassa nation that has long been relegated would once again bounce back.

The aspirant dedicated his clearance and nod to contest to the people of Igala Bassa nation who are the reason behind his aspiration, thanked those who prayed and showed concern when it mattered most.

Adoji promised if elected to justify the confidence reposed on him stating that he has what it takes to ensure that Kogi East Senatorial District occupies a vantage in the nation’s politics in the upper chamber of the National Assembly.

The aspirant promised to centre his energy on improving the critical and vital infrastructure needed by the people to live comfortable, assured of laws that would improve on job creation, quality health care delivery, education and rural infrastructure.

He described his aspiration as one borne out of the common good of the Igala Bassa nation, says he is optimistic of victory at the party primaries as well as the general election.

Buhari’s minister ready to go back for NYSC

Army finds missing General’s car, four other cars in a pond in Jos