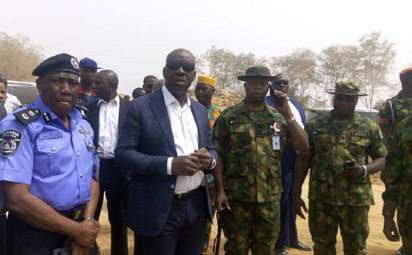 To investigate sponsorship of militias in Okpella by BUA The Edo State Government has countered the claim by BUA International Limited that it adopted “a gestapo-style to forcefully shutdown Obu mine site” in Okpella on Wednesday, describing the claim as ludicrous.
In a statement issued on Thursday in Benin City, the Special Adviser to Governor Godwin Obaseki of Edo State on Media and Communication Strategy, Mr Crusoe Osagie, maintained that the Edo State Government’s primary duty as a responsible government is to ensure that the prevailing peace in all parts of the state is not punctured by any individual or organisation and that the rule of law is upheld at all times.
Osagie said BUA’s statement is fraught with contradictions and urged the company to behave as a decent corporate citizen of the state by virtue of its investment in the state. “In the first paragraph of BUA’s statement, the company claimed that the Edo State Governor effected a gestapo-style to forcefully shutdown the mine. “In the very next paragraph, BUA said that ‘Upon reaching the mining site and not meeting any personnel or equipment two BUA Cement employees were invited to the mining site to receive the Governor. “Are these two statements not contradictory? If no one was at the site, then why would the governor use gestapo-style to shut it down? “So why is BUA spreading falsehood? The workers and equipment were being evacuated by the time we got there, and understandably, they had heard that the governor was around and were rushing out of the site. They clearly flouted the Stop Work Order and now want to mask their violation of the order by resorting to blackmail.
Related Topics:
Up Next