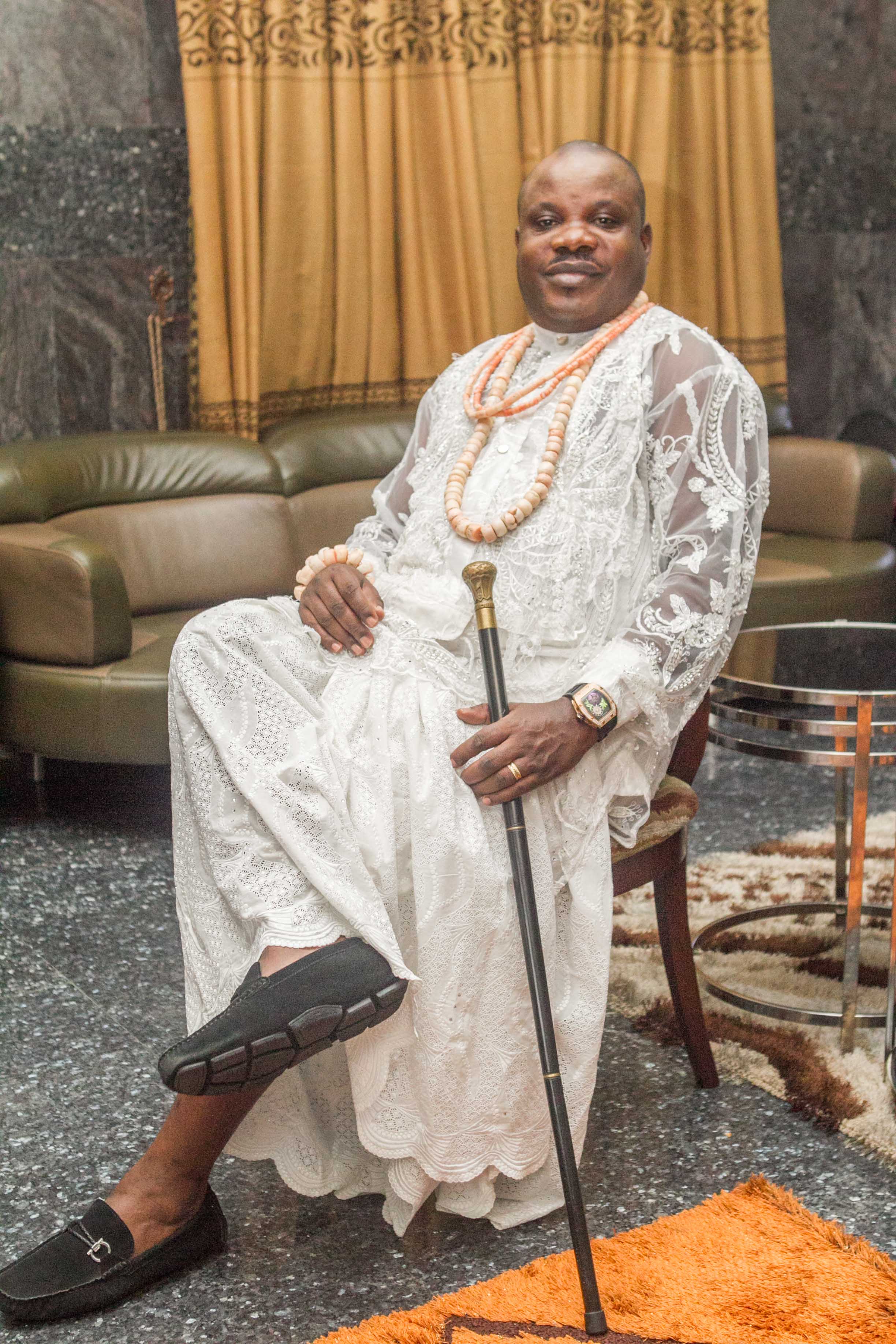 “Your long-term happiness and fulfillment depend on your ability to fulfill your soul’s unique purpose and to fill the place in the world that only you can fill, making the contribution that only you can make.” Rod Stryker

It’s not uncommon to see people from significantly humble backgrounds become successful, but this mostly happens with people who believe in their dreams and muster the tenacity and courage to make them reality.

History has proven how true this is by the practical examples of the life of successful people, all over the world; some riding on the back of already established wealth and relationships that became subservient to their goals or destiny, while for others, success was achieved through sheer doggedness, determination, resilience and passion in the face of daunting odds.

Chief Dennis Otuaro’s story is an inspiration that young  people everywhere can take a cue from, as it teaches how focus, resilience, hard work, taking advantage of opportunities at the right time as well as trust in God are important pillars for success and fulfillment, despite where one may find oneself in life.

In his pre-teen age, Dennis Otuaro was but only a young man with dreams, a great passion for success and a lot of resilience.

Otuaro lost his parents at the very tender age of 8, but even at that young age, he knew he didn’t want to end up like most people who took such a disadvantage as an excuse to wallow in penury. He resolved nothing was going to stop him from making it in life; not the rigors of the hard life, not the emptiness of being devoid of parental warmth and care, not peer pressure or any other factor. In his words, “Having lost my parents at the age of 8, I started living on my own. When you are surviving at that young age on your own, the situation does not necessarily drive you into criminality but makes you focus on what you can achieve. It’s not like nowadays that everybody gives excuses for criminal acts on hard life or the devil. “

He got admitted into the Delta State University and pursued a Bachelor’s Degree program in Political Science, graduating with Second Class Honors in 2005.

His leadership traits began to manifest while in the university, as Otuaro was involved in student activism, charting ways in which students’ interests would be better served while studying. He was Secretary General, National Union of Izon-Ibe (Ijaw) Students (NUIS), Delta State University, Abraka Chapter, Delta State between 2003 and 2004 before taking over as President of the union from 2004 to 2004.

After the completion of his National Youth Service Corps mandatory one year program, Otuaro embarked on a further course of study at the University of Benin, bagging a Master’s Degree in International Relations in 2008.

Apparently a lover of academics, Otuaro would pursue another Master’s degree in Public Administration at the same university, finishing in 2009.

Determined to go the whole hog, Otuaro applied for his doctorate degree program at the University of Benin, where he is currently rounding up on Comparative Politics and Developmental Studies. He was awarded a professional certificate on Leadership Challenge in the Contemporary Workplace in 2014 by PROT Consulting.

Being someone with patriotic fervor, service to fatherland is something Chief Dennis Otuaro finds consummate delight and fulfillment in, as it gives him the opportunity to give back to the society and help impact the lives of people.

With his education and experience, Chief Otuaro has brought this to bear in his various engagements of service which cuts across his state’s government, the Federal Government, other social bodies and international agencies.

Now involved in developmental activism, Chief Otuaro has served as Chief Protocol Officer to the Chairman, Delta State Oil Producing Areas Development Commission (DESOPADEC) from 2007 to 2010; a commission created to improve infrastructure in the oil-bearing areas of Delta State, generate employment, which would potentially ebb and subsequently put to rest the high level of insecurity -related incidents in those parts. He was also a member of the Delta State Waterways Security Council, as well as Chairman of the sub-committee on security of the council from 2007 to 2015.

As a stakeholder in the Niger Delta, these experiences gave him the opportunity to help in bridging the communication gap between communities and oil producing companies in the region with the government.

“I was able to bring the youths to understand the projects of the government and the relevance of these programs for them”.

Chief Otuaro has been a clarion voice for the provision of infrastructure and restoration of the natural environment of the Niger Delta, given the danger of oil spillage and other activities of multinational oil companies affecting the region’s ecosystem.  In 2004, during the regime of late President Umaru Yar’Adua, he was appointed a member of the Presidential Committee on the Environment on the Niger Delta,  which helped the government of the day understand the environmental challenges of the Niger Delta region and proffered possible solutions to them.

According to the Gbaramatu Kingdom Chief, “We will not stop speaking, we’ll not stop struggling, until the oil companies and the government sees the need to take appropriate steps to protect our environment so that our natural life, the ecosystem is restored, because the environment is deteriorating every day.”

Between 2003 and 2004, Chief Otuaro served as a member of the Presidential Council on the Socio-Economic Development of the Coastal States of the Niger Delta; areas he believes are neglected but critical to the economic development of, not just the region but the country at large.

“Development is from the coast. In other climes the coastal states are the most developed, but in Nigeria, the wealth is being collected from the coast to the hinterland. Development of the region is critical. When you develop the Niger Delta, it will reflect on the country.”

A diplomatic liaison with extensive history of collaborating with a wide variety of stakeholder groups on substantial public issues, Chief Otuaro has successfully navigated the political terrain and secured support from divisions and outside stakeholders to ensure successful execution of projects or initiatives.

With a respectable antecedent as a highly organised and creative leader, quite adept on multi-tasking and successfully accomplishing set targets, he has initiated corporate strategies and implementation, set strategic goals and made sure they were measurable and implementable.

With his vast experience leading several academic and social groups, he has garnered an in-depth understanding of managing people and cultivated worthwhile relations with leaders at all levels to develop and maintain support for effective system implementation.

A man of vision, with entrepreneurial savvy, focused and goal-driven, Chief Dennis Otuaro has established and he successfully runs a few companies while also on the board of several companies.

In 2008, he established the Owelle Global Resources, basically to help increase the profitability of companies by enhancing operational efficiency, a feat the company has successfully sustained over the past 12 years, across a wide spectrum of sectors, including MDA’s and SME’s.

The company has thrived in the Logistics and Consultancy business terrain, with a string of excellent records in efficient execution of programs and projects, as well as the provision of support for its subsidiary companies and projects across the country.

An active player in the country’s agricultural sector, through his company , he  has been vibrant in the sector, adding value to the economy and he also oversees two security outfits.

When one is focused, dedicated and goal-getting, it only requires the all- important trait of consistency to break grounds or set new records; a trait which reflects in every endeavor of Chief Dennis Otuaro.

It is not surprising then that on September 10, 2008, he was conferred with the chieftaincy title of Ibe-Uyadonwei of Gbaramatu Kingdom in Warri, Delta State at the young age of 30.

He explains it this way; “Hard life gave some of us the strength to survive and even stand out among contemporaries. In such a situation, people observe, especially when you keep succeeding at what you do. When you are steadfast, the society will see you and will reward you”.

“I was conferred a chieftaincy title in my village at a very young age as the ‘Ibe-Uyadonwei  of Gbaramatu Kingdom’ in Warri Southwest. The meaning of the title is ‘Patriot of Gbaramatu kingdom’. It is very challenging but one thing I believe in is service. My desire is always centered on service to my community, service to my state and service to the government. Over the years much of the work I have done are in the area of service. It doesn’t have to be all about appointments. I believe the greatest thing that could happen to anybody is having the opportunity to serve the society.”

Chief Dennis Otuaro’s voice with respect to the struggle of the Niger Delta is stentorian. The Niger Delta remains a region of underdevelopment, lack of basic infrastructures, environmental degradation stemming from oil spillage, gas flaring and other activities, especially of the oil companies operating in the oil rich region, which destroy the ecosystem and foster low quality living among other disadvantages.

“I am a product of the Niger Delta struggle; I started facing those challenges at a very early age. Since the age of 18, I have been in the struggle.”

“All we are asking for is a fair share. You cannot be producing these resources and stay neglected. The oil accounts for 90 percent of the country’s export. Yet what we see is a kind of coastal case of underdevelopment. Underdevelopment of the Niger Delta is very pronounced. It does not need any investigation. Question is, are we going to remain like that?”

“We will not relent in the struggle to make this place a better place.”

It is a popular saying that behind every successful man there is a woman. Chief Dennis Otuaro puts that fact succinctly, attributing the successes in his endeavors to his wife, of whom he speaks eloquently.

“My wife, Mrs. Ebimoboere Otuaro is someone that I see as a mother; kind, dependable, resourceful and more. We were relatively young when we met and at that very young age, when you don’t have parents and you come across a woman that becomes close to you and gives you meaningful advice, nothing can separate you from someone like that. It is by the grace of God that you find a woman like that. We have been married for 20 years.”

With diligence, honesty and a belief in God as core values, Chief Otuaro looks ahead to the dawn when the Niger Delta region will be accorded its deserved place in the Nigerian project. He hopes to continue adding value to the business space improving service delivery, process re-engineering and automation based on the specific needs of different organisations.

Steve Osuji Spits Fire Over NGE Elections: They say I am an ASSOCIATE MEMBER!