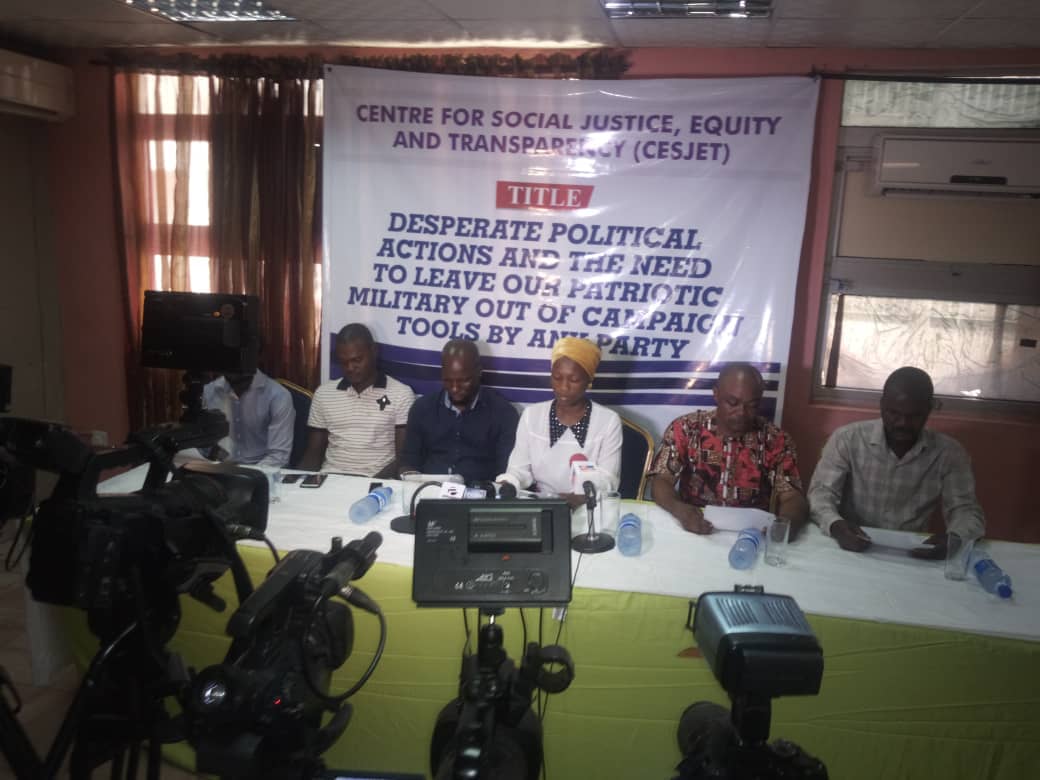 The Centre for Social Justice, Equity and Transparency (CESJET), has berated the Presidential Candidate of Peoples Democratic Party (PDP), Atiku Abubakar, for attempting to taint the person and office of the Chief of Army Staff, Lieutenant General Tukur Yusufu Buratai.

Atiku had listed Buratai among 30 persons he claimed were corrupt and working for President Muhammadu Buhari.

Reacting, the centre said it was wrong for Atiku to drag the army chief into partisan politics.

Osaloni Gbemisola osadua Esq, Executive Director, while addressing a press conference on Tuesday, warned the PDP presidential flagbearer against peddling falsehood that could cause injury to the integrity of others,

He said, “The pressure he is under, from political barometric as of today, is beyond the realization that he is set to lose the presidential election when it holds in a few days from now, the pressure is coming from the appreciation that the result of the polls will permanently and conclusively retire him from politics.

“Rather than heralding a befitting end to an illustrious political career, this damning retirement would demystify Atiku Abubakar’s in the annals of Nigeria’s political history.
The PDP presidential candidate, in fairness to him having not been ever arraigned talk less of being convicted, goes around with the burden of corruption, heavy enough for himself to have acknowledged that allegations of corruption is the heaviest burden he has to carry in his failed quest to rule Nigeria.

“Even though he has now embarked on a revisionism, Atiku Abubakar’s former boss, Chief Olusegun Obasanjo, when he has prime contact with the PDP current candidate described him as the most corrupt Nigerian there was. We sympathize with him that he has to go around with this kind of tarnish.

“But it beats the imagination that this same Atiku Abubakar, irrespective of how desperate he has become in his bid to fend off an enforced retirement, is now wildly accusing other upstanding Nigerians of corruption. Our initial thought was that overzealous aides went beyond their briefs to make such accusations on behalf of Atiku Abubakar but we have since learnt that he is in on the game after waiting a considerable time without him walking back the release of the list by one Phrank Shaibu, who is said to be his Special Assistant on Public Communications.

“With the names that made Atiku’s list of corrupt persons connected to President Muhammadu Buhari, even the electorates that will cast the losing votes for him should at this point begin to question the extent to which their choice candidate has succumbed to psychosis. The list confirmed that Atiku Abubakar’s desperation no longer has much to do about winning but is now the manifestation of a man that has become embittered by the prospect of losing to the extent that he maniacally wants to drag down everyone with him.

“First, the list went on to name the likes of Babachir Lawal, former Secretary to the Government of the Federation (SGF) and Ayodele Oke, the suspended Director-General of the National Intelligence Agency (NIA). This goes to show that Atiku is obsessed with finding allegations of corruption against President Buhari to the point where the PDP candidate continues to accuse him of being connected to the people he has sacked.

We also saw Bola Tinubu, former Lagos State Governor and National Leader of the APC; Abba Kyari, Chief of Staff to President Muhammadu Buhari and other past and serving appointees making the list even when they have never been convicted by any court, save the circus of public opinion convened by Atikulooters.

“Most infuriating for Nigerians is Atiku Abubakar’s indiscretion in including names of patriots like Lieutenant General Tukur Buratai, the Chief of Army Staff, which is wrong on many levels.

“We consider it most unpatriotic to insult a man that is leading Nigerian troops against terrorist in this manner without substantiating the allegations of corruption against him. It is on record that the Code of Conduct Bureau has cleared him long ago and he has not been convicted by any law court. We have followed Buratai antecedents and know him as an honest and transparent man, who has conducted himself appropriately in office.

“It is ridiculous how the same candidate that was harping on the need for the military to be apolitical to now be the one trying to drag the Army into politics.

“The inclusion of a serving military chief in his phantom list is consistent with the errands that Atiku’s minions and urchins have been running on his behalf for several months now. These errands, as have been reported, are meant to undermine the military and provoke a leadership change so that pro-coup-plot officers that are sympathetic to reversing Atiku’s unfolding political twilight will come into office.

This is a brazen threat against our democracy and must not be received halfheartedly. Nigerians must rise up across party line to demand that Atiku contain whatever emotional fall out arising from his imminent loss to himself and not drag the country down with him.

“CESJET warns that attempts by desperate politicians to drag the Army as an institution into politics should be totally discarded as by well-meaning Nigerians will resist such plot using all permissible means.

“There is no law that precludes people from becoming insane by reason of emotional stress brought on by the glaring confirmation of loss at the polls. What the Centre for Social Justice, Equity and Transparency (CESJET) and indeed the entire Nigerians will not condone is when the insanity involves the patient going berserk and indiscriminately throwing muds at honorable citizens, whose weakest moments trump Atiku at his most pious.

“Atiku’s political fortunes are already sinking. It would hurt his credibility if angry Nigerians are further mobilized to increase the margin by which he will be defeated. This will be the case in the event that he continues to drag the wrong persons into his private war with his emotional trauma.

“In addition to demanding that the PDP presidential candidate ceases and desists from peddling rumours that cause injury to the integrity of others, CESJET hereby demand an apology from Atiku Abubakar and his hirelings.

“Considering the impact of Atiku’s indiscretion on the man leading the counter-Insurgency operations in Nigeria, we shall be left with no option in this case than to institute a legal action against him in court if the position of the Chief of Army Staff is not immediately withdrawn from his fake list and apology tendered to General Buratai within two weeks from today.”