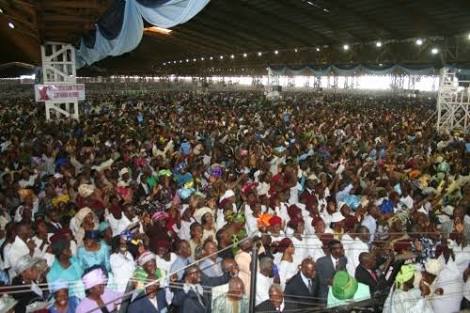 There is no more hiding place for thieves and others fond of doing odious things at the Redemption Camp of the Redeemed Christian Church of God (RCCG), as anyone who does so would be caught in the act.

The fastest growing church in the land now uses technology and man to track and stop the dubious characters in their acts.

A Closed Circuit Television (CCTV) installed on the Redemption Camp exposed a man who stole envelopes containing money inside the tithe and offering box in the Old Auditorium of the camp during the first Holy Ghost Service of the year over the weekend.

The General Overseer of the Church, Pastor Enoch Adeboye made this known during the January 2020 Holy Ghost service of the church, which held at the 3 by 3 kilometre auditorium of the church, Agunfoye.

Adeboye while announcing to the congregation that the Redemption Camp now has CCTV cameras, said since the devise was installed it has exposed many terrible things going on in the camp.

“I was shown the clip of a man who went to take envelopes in the tithe and offering box in the Old Auditorium. When the man got to the auditorium, checked right and left and found out that nobody was around. Unknown to him CCTV cameras were recording what he was doing. He took the envelopes in the box and stuffed them in his pocket. By the time he was about escaping with the envelopes, a motorbike from the CCTV Centre caught up with him and he was apprehended.

“Initially he wanted to resist arrest because he claimed to have done nothing. But by the time they searched his pockets they discovered several envelops including tithe, first fruit and offering envelops with money in his pocket. He could not argue again,” Adeboye added.

‘Daddy G.O’, as he is fondly called, said he was shown another recording where a young man broke into a car on the camp and began to take things from the car. Before he could escape with what he stole from the car a bike man from the CCTV Centre caught up with him.

He then told the congregation he was mandated to tell them that there are now CCTV cameras on the Redemption Camp that cover every nook and cranny of the camp.

“You all know that there are angels watching over us on camp. But I have been asked to tell you that there are CCTV cameras on the camp which records all that is going on in the camp. It is part of the requirement of the law that we announce the presence of such equipment. So you can’t afford to misbehave on camp. Every car that comes into the camp is being recorded and all activities even in the dark as long as they are being done on the camp are being recorded.”

Adeboye said there were several other discoveries in the camp through the CCTV stating that there is “light” on the camp drawing from the theme of the January Holy Ghost service.