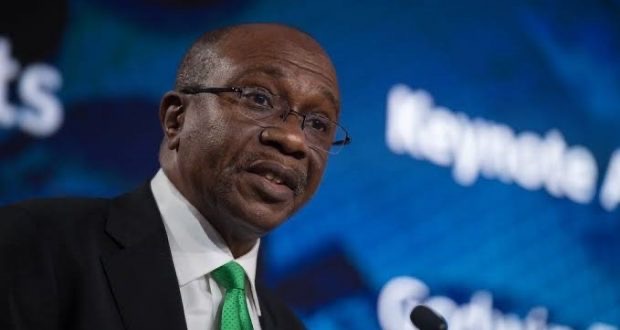 Except he changes his mind, the governor, Central Bank of Nigeria(CBN), Godwin Emefiele may resign his appointment this January to aspire to be Nigeria’s president in the forthcoming 2023 general elections.

The governor, it was learnt, has finalised arrangements to pursue political aspirations.

Osita Nwanisobi, the spokesperson for the apex bank refused to comment on the development as telephone calls, e-mail, text and WhatsApp messages to him were not answered when contacted.

The CBN governor also did not respond to telephone calls, texts and WhatsApp messages asking for his comments on the likely plan to contest for the presidency.

However, sources at the Apex bank confided in insidebusiness.ng that Emefiele informed the four deputy-governors of the bank of his political ambition last December. He will run on the platform of the ruling All Progressives Congress (APC).

“As of August 2021, we are 100 per cent sure that he will run for the position because of the overwhelming pressure from some prominent persons from the Northern part of the country who felt that he has performed well as a CBN governor”, stated another source outside the apex bank.

Electioneering for the 2023 elections is heating up and every serious contender is expected to make their intentions known now especially since the APC convention to elect new officials is scheduled for February, next month.

Two aspirants, Ahmed Bola Tinubu, a chieftain of the All Progressives Congress (APC), and the governor, Ebonyi state, David Umahi have visited President Muhammadu Buhari separately, informing him of their aspirations to succeed him.

Emefiele was appointed governor of the apex bank on 3 June 2014 after the removal of Lamido Sanusi Lamido, former governor of the bank. He was re-elected on 16 May 2019 after his confirmation by the Senate. He will be the third to take such a decision among those that had served the bank meritoriously at the top level.

Charles Soludo, who served between 2004 and 2009 got elected as the governor of Anambra state last November and currently waiting to take the oath of office. Also, the former deputy-governor, CBN, Bayo Adelabu left in January 2018 to contest the governorship of Oyo, a frontline state in the South West. He contested in 2019 on the platform of the ruling APC but lost to Seyi Makinde of the opposition party, the Peoples Democratic Party, ( PDP).

If the CBN Governor submitted his resignation letter to President Buhari this month as he told his lieutenants, he will be expected to leave office formally in April 2022 in line with the provision of the enabling act of the government banker.

Section 11 (3) of the CBN Act 2007 provides that the “Governor or any deputy governor may resign his office by giving at least three months notice in writing to the President of his intentions to do so and any director may similarly resign by giving at least one month’s notice in writing to the President of his intention to do so”.
Emefiele when he finally signifies the intention to run for the most exalted office of the nation will be joining other contestants including Bola Tinubu, former governor, Lagos state between 1999 and 2003, who is also keen on the nation’s plum position.

All the contestants are expected to file out now for electioneering given the indications that the presidential candidates of all the political parties may emerge latest by August 18, 2022.

The INEC Chairman, Prof Mahmood Yakubu, announced on April 28 last year that the presidential election would be held on February 18, 2023, noting that the commission hoped to release the timetable and schedule of activities for the election immediately after the Anambra State Governorship election that held on November 6.

INEC is probably waiting for the assent by President Buhari of the 2021 Electoral Act amendment Bill that was passed by the National Assembly on November 9, 2021, for it to release the timetable.

The Act extended the dates that political parties must submit the names of their candidates to INEC from 60 days to 180 days before the date of the election. If the President assents to the bill, it becomes a law and INEC would be expected to design its timetable by the provisions.

Section 31 of the old Act had to do with the submission of candidates’ names and their affidavits by political parties.

Section 31 (1) reads, “Every political party shall not later than 60 days before the date appointed for a general election under the provisions of this Act, submit to the commission, in the prescribed forms, the list of candidates the party proposes to sponsor at the elections, provided that the commission shall not reject or disqualify the candidate (s) for any reason whatsoever.”

The section has now been amended with the amendment of subsections 1, 6 and 8.

The amended Section 31 (1) now stipulates that submission of lists of candidates by political parties shall be done not later than 120 days before the date appointed for a general election and candidates must have emerged from validly conducted primaries.

Emefiele, coming from the banking industry which is a prominent sector of the business community will not have problems raising the money for the nomination form of the party and that of the INEC and also for campaigns if he becomes the flag bearer of the APC.

The CBN governor will be expected to have the political clout with grassroots appeal and a good record of experience in politics to rub shoulders with other contestants especially Tinubu, who is widely believed to be the one that made the current APC. Emefiele is also expected to have a presence in 516 local governments representing two-third of the 774 in the country.

The idea for the merger of President Buhari’s former party, the Congress for Progressive Change (CPC) and the Action Congress of Nigeria (ACN) that produced APC to wrestle down powers from the PDP which ruled for 16 years is said to have originated from Tinubu. President Buhari contested against the PDP and failed three times before being victorious on the platform of the APC, a feat which was ascribed to the strategies of Tinubu

Tinubu, known as a dogged fighter and a strategist, while as Lagos governor between 1999 and 2007, made the state a frontrunner amongst the 36 in the federation despite being starved of monthly federal allocations from 2003 to 2007

Former President Olusegun Obasanjo withheld the monthly allocation to Lagos, following the refusal of Tinubu to reverse the creation of 37 Local Development Councils (LDCs) that increased the number of local councils in the state to 57 for easier democratic administration. The withheld allocation was released by late President Umaru Yar’Adua during the tenure of Babatunde Fashola, former Lagos governor between 2007 and 2015. Fashola is currently, the Minister of Works.

Emefiele’s tenure will be remembered as one that empowered local businessmen, especially farmers through the various intervention programmes on which the CBN expended about N3 trillion.

Most popular is the Anchor Borrowers Programme (ABP) which targets MSMEs such as smallholders farmers. Pharmaceuticals and health institutions are also beneficiaries of the CBN intervention programmes.

Speaking on a TV programme, Emefiele said, “I can tell you that, between 2020 and now, our data shows that we have disbursed at least N2 trillion, almost N3 trillion in loans to households, to MSMEs, to smallholder farmers, to pharmaceuticals and health institutions.

“We have also given these funds to some of our large agricultural companies that want to get back again to business, to manufacturing companies who are accessing long term 10 years loan with two-year moratorium with single-digit rate. I have data that shows we are playing our part.”

The eight years that he has spent will also be remembered as the period during which the CBN veered off from its traditional and statutory roles of managing the macroeconomy. Section 2 of the CBN Act 2007 states the principal objects of the Bank shall be to – (a) ensure monetary and price stability; (b) issue legal tender currency in Nigeria; (c) maintain external reserves to safeguard the international value of the legal tender currency; (d) promote a sound financial system in Nigeria; and (e) Act as a banker and provide economic and financial advice to the Federal Government

Another memory of the tenure will also be the stifling exchange rate. The exchange rate was N163.24 to a dollar as of 30 June 2014 and now, it is N415.70 per dollar at the official rate while it hovers between N560 and N567 at the black market.

Afam Mallinson Ukatu, the National Chairman of Non- Metallic and Mineral Products, a sectoral group of Manufacturers Association of Nigeria (MAN) told insidebusiness.ng that many manufacturers are not able to have access to forex and this is leading to factory collapse, especially in the steel sector of the economy.

Also, huge loans from CBN/AMCON totalling over N2 trillion to the banks remain unpaid despite the quarterly declaration of huge profits by banks. It was also learnt that several billions of naira of commercial agriculture scheme loans to several prominent persons in the country are also not performing