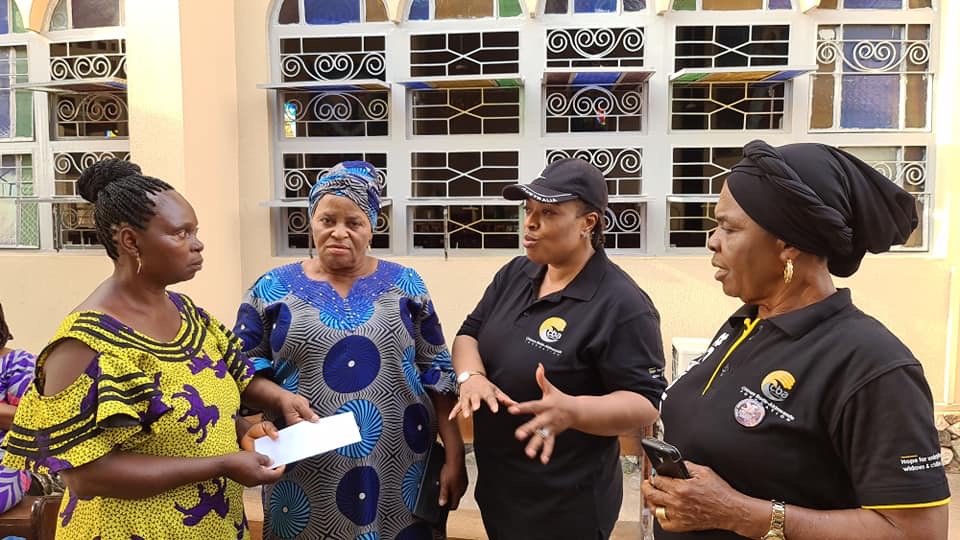 It’s a crime to be a widow! Yes, that’s exactly what you read. Please stop reading it again and again to see whether it’s meant figuratively or literally. It’s exactly meant the way you read it at first.

Does our society say being a widow is a crime? No. But does the society act as though it’s a crime – and a big one at that? Absolutely. Capital YES! So it doesn’t matter what society says or doesn’t say or what it has tucked away somewhere in our statute books. What matters most is what society does. Society’s action, demonstrated in the way widows are treated and which speaks louder than its words, calls widowhood a crime.

Are widows treated by our society any better than criminals or those suspected to be/have engaged in any form of criminal activity, including ex-convicts? Criminals (or those alleged to be or have been) are avoided like a plague. They’re ostracised. They’re shamed. They’re stigmatised.

The Foundation pursues its mission under its 5-point agenda of Women Empowerment/Capacity Building, through which it has reached out to over 8,600 widows; Health Intervention, wherein it has overseen the administration of treatment and medicines to over 4,500 underprivileged widows; Nutrition, under which it has distributed food items to over 10,600 underprivileged widows; Quality Basic Education, through which 158 children have been reinstated in school; and Self-Employment Scheme, wherein it has financially empowered 220 widows to start their own businesses.

These efforts as well as those of other like-minded NGOs working to enhance the welfare of suffering widows are highly commendable. Viewed against the backdrop of the theme of this year’s International Widow’s Day, commemorated across the world last Wednesday 23rd June 2021: “Invisible Women, Invisible Problem”, the work of these NGOs makes poor widows, who society would rather not want to be seen or heard, visible so the problems they face daily can be visible as well to all. After all, the International Widow’s Day was introduced by the United Nations to raise global awareness of the issues faced by widows and highlight as well as combat “poverty and injustice faced by millions of widows and their dependents in many countries.”

Mr Husband, what are you doing to protect your wife (and children) in case the unexpected happens? Don’t be fooled by the love that your siblings and kinsmen have for you and your family. It’s conditional love predicated on your presence (and presents). It will not be there in your permanent absence. What about you, adult children, who can and should do something? What are you doing to ensure that your mother, that auntie, that woman relative of yours don’t become a dehumanised widow if her husband dies unexpectedly?

And you traditionalists who hold onto anachronistic cultural practices that debase women, especially those who have lost their husbands, and treat them as the scum of the earth, can you point to five ways your diabolical wickedness towards widows have made your life or your family’s any better? Can you identify the modern amenities that your backward ways have attracted to your community? You claim that they’re traditions instituted by your forefathers which you must uphold perpetually, yet you have conveniently abandoned other traditions and embraced modernity where it suits you. Your forefathers never asked you to speak the white man’s language, wear his clothes, use his goods, read his books, send your children to his school or trade with modern money, but you’ve adopted all of these and abandoned the alternative traditional practices using your common sense. What is stopping you from applying this same common sense to end the diabolical traditional practices that you use to shame and debase widows? Even Satan must be stunned by your grand hypocrisy.

This year’s International Widow’s Day has come and gone with little or nothing to celebrate as the lot of Nigerian widows hasn’t improved much over the last one year. Isn’t it high time we changed both strategy and tactics and get out of the insanity of expecting a different result while still doing the same old thing year after year?

Chinwe Bode-Akinwande, founder of CBA Foundation, answers in the affirmative. Her Foundation once ran a Twitter campaign with the hashtag #careisaction, which asserted that “…without action, you truly don’t care, regardless of what you claim.” Next year’s commemoration is already beckoning, and in line with her call for action, the sixty-four thousand dollar question remains: is there any reason to be optimistic about seeing significant improvements in the lives of our widows if as a society we are not yet willing and determined to take action to confront and defeat the entrenched forces and issues that make widowhood a crime in this clime?