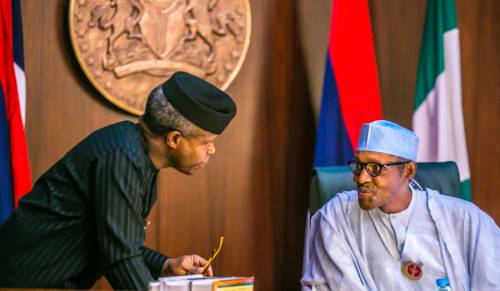 The Christian Association of Nigeria has weighed in on the alleged ongoing rift between President Muhammadu Buhari and Vice President Yemi Osinbajo.

Reports of how Osinbajo was sidelined in the current administration were trailed by public frenzy about the relationship between the two leaders.

Also, the sack of 35 of the vice president’s aide has heightened the tension as media report continued to show how the Abbah Kyari, the Chief of Staff, is complicit in the alleged rift.

Reacting to this in an interview with Punch, Adebayo Oladeji, the Special Assistant on Media and Communications to CAN president, urged the two parties to sheathe their swords.

Oladeji said, “Both Vice President Yemi Osinbajo and the President have told the whole world that the Presidency is one and that there is no division. That, we believe and Prof. Osinbajo has never told CAN that he has a problem with his principal.

“So, as far as we are concerned, there is no crisis between them until we are told otherwise. Be that as it may, we are not happy with what we hear. It is said that in every rumour, there is an element of truth. So, if there is any problem with them, we advise them to resolve it.

“If it has to do with 2023 politics, we advise the warring camps to sheathe their swords because 2023 is still far away. It is only God that knows who will be there. We are so much in a hurry. We just held elections this year.

“The Vice-President and his principal were just re-elected for a new term and have yet to fulfil their campaign promises. The ruling party should sit up and look at how to fulfil their promises rather than focusing on 2023.”