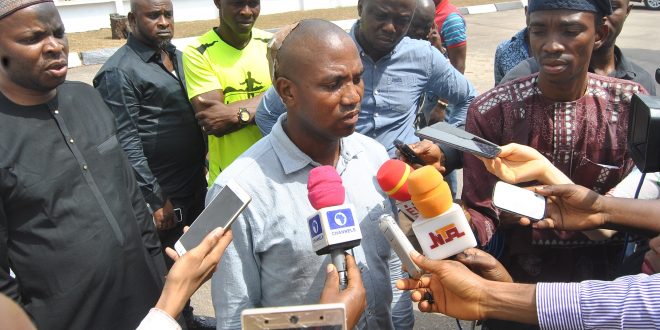 Some youths from Okpella community, in Etsako East Local Government Area, where the disputed Obu mine site is located, have cried out over attacks by a militia called the BUA Surveillance Group supposedly armed by BUA International Limited to move against its real and perceived opponents in the community.

Speaking with journalists in Benin City on Tuesday, the youths, who were sporting different degrees of injuries, bemoaned their ordeal in the hands of the militia, calling on the Edo State Governor, Mr. Godwin Obaseki, to maintain his stance on the disputed mine site to forestall further breakdown of law and order.

One of the injured Okpella indigene, Mr. Omoh Beture, who sustained a head cut, said that he had gone to welcome the governor when he came to shut down the mine site, only to be attacked by the militia when he asked that a barricade mounted close to the Okuokpellagbe’s palace be removed.

According to him, “I was at home when the Senatorial Youth leader, Blessing Dirisu, called me that the governor was coming to town. As a youth leader, he asked me to mobilise my people to cheer the governor.

“On our way to the palace of his Royal Highness, the Okuokpellagbe of Okpella, we saw some boys barricading the road. We asked them what they were doing there. They said they came to block the governor because he came to Okpella to shut the Obu mine site.”

He said he advised the disgruntled youths to properly channel their concerns and that if they truly wanted to send a message to the governor, they should call a press conference and tell the world that they don’t want people working on the site to lose their jobs.

“Immediately, I called the youths to remove the barricade. The boys rushed out and attacked us. They rushed me and beat me up. I reported the matter to the Divisional Police Officer (DPO), Okpella Division. The matter was documented. I was initially at Auchi General Hospital. But I was only recently transferred to Benin City,” he added.

Another youth in the area, Akemokue Lukman, said that it was very wise of the governor to shut the mine as the activities of the BUA Surveillance Group was creating serious tension and endangering the lives of people in the community.

According to him, “It is no longer news that there is crisis between Dangote and BUA International Limited. One of them has armed a group of boys in our community and tagged them BUA Surveillance Group. They are armed with a Toyota Thundra Jeep with enough pump action guns. They have been hiding under the pretext of Surveillance and Vigilante. Their mission is to intimidate anybody who seems to be a perceived opponent of BUA, including the governor.”

He added that since the ongoing scuffle on the pages of newspapers, the community has discovered that each group is arming and recruiting boys for a showdown.

According to him, “There are two or three instances where boys went to that place to fight each other. What the governor did by shutting the mine site, is right. I believe the mine should be shut until the court gives its judgement.”

Some of the other youths injured in the attack include Sule Mohammed and Yusuf Afam.