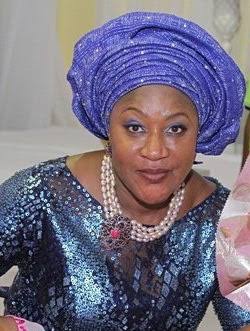 The Women Leader of the All Progressives Congress (APC) in Lagos State, Hon. Jumoke Okoya-Thomas has urged the residents of the state, especially women to be vigilant and protect their votes during the Presidential/National Assembly General Elections scheduled for Saturday February 23, 2019
Okoya-Thomas said in a press statement, which was released on her behalf by her media aide, Oladipupo Awojobi that the voters in Lagos State should ensure that the votes were counted and the results declared in their presence at the various polling booths in the state.
Okoya-Thomas pointed out in the statement, which was made available to journalists on Thursday, that the electorates in the state, especially women, should protect the ballot boxes against ballot box snatchers, who she said could be on the prowl during the elections.
The former member of the Federal House of Representatives said further that democracy had come to stay in Nigeria and that the APC was aware of the antics of the main opposition party to manipulate and scuttle the forthcoming elections.
“We will not allow any unscrupulous element to tamper with the will of the people or threaten our democracy through snatching of ballot boxes and hooliganism.
“I want to appeal to women and all the residents of Lagos State to come out enmasse to cast their votes for the APC and ensure that they stay behind until the votes are counted at the polling booths.
“All of us should discourage any act of vandalism or disruption and expose anyone that tries to scuttle the exercise.
“All hands should be on deck to ensure that the country moves to the next level and that President Muhammadu Buhari and Professor Yemi Osinbajo are returned so that they could continue their good works.
“Moreso, let us vote for APC candidates for the Senate, Federal House of Representatives in the state so that they could continue to deliver the dividends of democracy to the residents of the state,” she said

Magnus Abe: When Osinbajo was announced as APC vice presidential candidate, Amaechi went into shock and doctor had to treat him