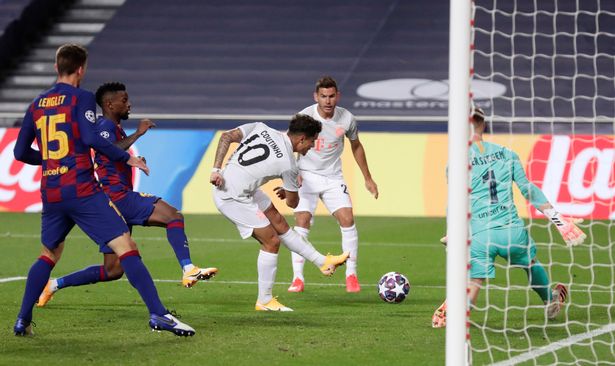 Barcelona could face the embarrassing prospect of having to pay Liverpool €5m (£4.5m) if Philippe Coutinho wins the Champions League with Bayern Munich this season.

The Catalan giants splashed the cash on the Brazilian attacking midfielder in 2018 in an eye-watering deal worth around £142m, but he failed to impress at the Nou Camp and has spent this season on loan at Munich.

On Friday he came off the bench for the Bundesliga champions to haunt his parent club in the Champions League and score two goals to add insult to injury in a brutal 8-2 thumping.

And as if that was not humiliating enough for Barcelona, it could get even worse if Bayern go all the way and win the tournament.

The deal to sign Coutinho from Liverpool included a number of potential add-on clauses, but incredibly they are player-specific rather than club-specific.

One of those clauses was that Barcelona would pay Liverpool £4.5m if Coutinho won the Champions League in either the 2018-19 or 2019-20 season, but it does not specify that it had to be while playing for them.

Bayern are arguably the favourites to win the competition following their stunning showing on Friday, and face the winners of Saturday’s Manchester City v Lyon clash in the semi-final on Wednesday before a potential final on Sunday.