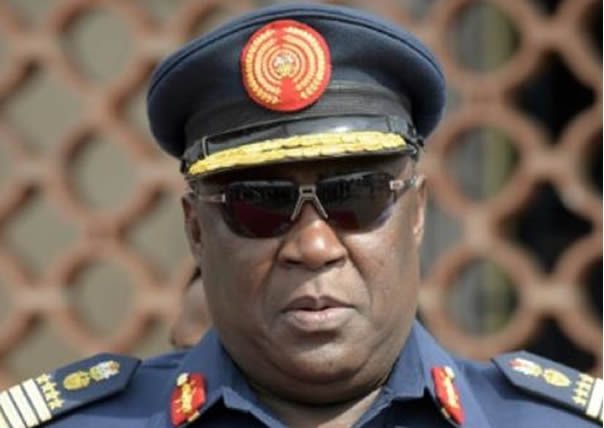 The Chief of Air Staff, Sadique Abubakar, an air marshal, has condemned the killing on Tuesday, of former Chief of Defence Staff, Alex Badeh, saying the incident was “totally unacceptable”.

He stated this at the Fourth Quarter Chief of Air Staff Conference on Wednesday in Abuja.

Mr Badeh, a retired air marshal, died from gunshot injuries sustained when his vehicle was attacked while returning from his farm along Abuja-Keffi road.

Mr Abubakar said the Nigeria Air Force was still in a state of shock over the death of its former chief.

“We are in no doubt in the state of shock of what happened yesterday when the former CDS was killed along Keffi-Abuja road.

“The entire Air Force family is shocked about the incident and we are expressing our condolence to the wife and children of Air Chief Marshal Alex Badeh.

“We are very appreciative of the sentiments expressed by Nigerians after the incident. It shows we love and support the Service.

He explained that the NAF was working very closely since Tuesday to find those behind the heinous crime, and said “by the special grace of God, we will get them and they will face justice.”

The air chief said it was an internal reminder to Nigerians that the military had shouldered the responsibility of protecting lives and property of all Nigerians.

“Though we are working hard, we should redouble our efforts; we need to work round the clock, we need to put in more effort.

“We need to collaborate more closely to ensure that these criminals are not allowed to endanger the lives of our people.

“On our part, as a service, I am sure you are aware of the efforts we are making to build the capacity of the special force and regiment personnel so as to add value to what we are doing in all parts of the country,” he said.

Mr Abubakar disclosed that the service recruited no fewer than 700 regiment personnel who were in training in Kaduna, adding that another batch would commence training soon.

According to him, the idea is to make sure that we bridge the gap that there is in our system in order to be able to deal with these challenges.

He stressed that security was everybody’s business, and that every Nigerian had a role to play to ensure that Nigeria was safe and secure.

“It is not entirely a military affair; those guys that shot Badeh came from an environment; so, we all have to put hands together to make sure that our national security is not undermined by individuals,” Mr Abubakar said.

He pointed out that the military had been working to ensure that every Nigerian was able to pursue his or her business without fear or intimidation.

He commended President Muhammadu Buhari and the National Assembly for resources they had provided to ensure that security challenges were reduced.

“There are gaps and these gaps have been there for long and we are trying to bridge them,” he said, and announced that NAF had just received one of its aircrafts, NAF 476, from the United States.

“We are working on it to make sure that we have sufficient number of aircrafts.”

The air chief assured Nigerians that the service was working round-the-clock to ensure that Nigeria’s sovereignty was not under threat.

He appealed to the Chiefs and Commanders at the conference not to be discouraged, but to be very bold and courageous to ensure that the country was secure.

He was billed to open his defence in the fraud charge against him by the federal government on January 16, 2019.

I’m not a politician — Fela Durotoye