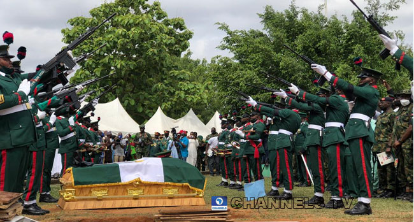 The remains of the Chief of Army Staff, Lieutenant General Ibrahim Attahiru and 10 other senior military officers, who lost their lives in an air mishap in Kaduna on Friday, have been laid to rest.

The late 11 military officers who died in a Beachcraft 350 aircraft at the Kaduna International Airport due to bad weather were interred on Saturday at the National Military Cementary, Abuja.

Earlier, the bodies were moved to the National Mosque and the Nigerian Air Force Protestant Church where funeral prayers were said for the deceased amidst tight security.

On Sunday, February 21, 2021, seven NAF officers died onboard a Beechcraft KingAir B350i aircraft when the jet crashed in Abuja.

Two officers were onboard the missing jet which was later declared crashed and the whereabouts of the two airmen unknown till date.

Wife of the late Chief of Army Staff, Mrs Fati Attahiru, at the National Mosque, Abuja.

TIV Youth Organizations Calls For Prosecution Of Okey Ifejoku, Others Over Murder Of Cyprain Kumaoran