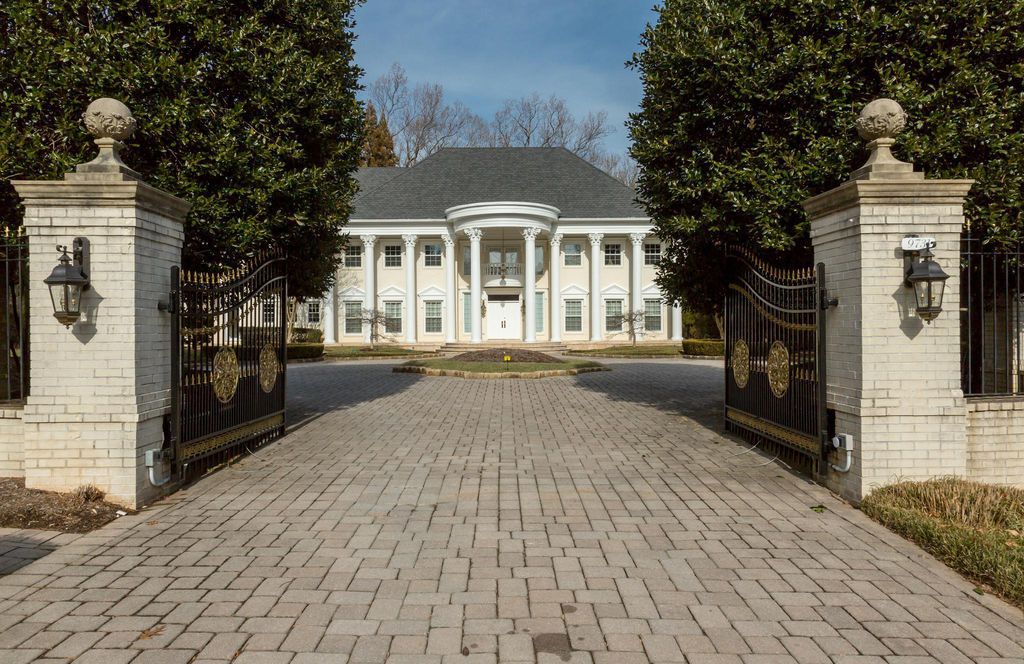 A luxury mansion co-owned by a former Vice President, Atiku Abubakar, and his fourth wife, Jennifer Douglas, in the posh neighbourhood of Potomac, Maryland, United States, has been auctioned.

The property gained international notoriety in 2005 after it was searched by the Federal Bureau of Investigations (FBI) in connection with a bribery scandal involving disgraced former U.S. Congressman, William Jefferson.

The seven-bedroom cream-coloured single family brick house on 9731 Sorrel Ave, Potomac, Maryland, was originally listed for $3.25 million on Zillow and other online real estate websites on January 25, 2018 but was eventually sold for a pending offer of $2.95 million on February 26, 2018 after an online auction.

A pending offer means a buyer and seller of the property have reached a deal. However, a buyer can still pull out from the deal (which is very unlikely) if they cannot resolve issues like cost of repair or they cannot get a bank to approve a loan for the purchase of the property.

Mr. Abubakar and Ms. Douglas bought the 7,131 square feet house in December 1999 for $1.75 million. Built in 1988, the house was described on Zillow as one of the finest in the tony neighbourhood of Falconhurst, Potomac, where houses are valued between $2 million and $10 million.

The Atikus’ mansion is a colonial-style building that sits in the middle of a 2.3 acres premises of lush green trees. The mansion has a total of 21 rooms, multiple terraces which are said to be ideal for outdoor parties, a pool sauna, a gazebo, a gourmet kitchen and an outdoor swimming pool.

Sources with knowledge of the state of the mansion but who requested not to be named because they did not want to be publicly associated with this story, said the Atikus had not lived in the mansion since Mr. Abubakar left office as vice president in 2007.

One source said that after 2007, house service staff lived in the mansion for some years, but the place was later locked up, and had remained unoccupied.

The house was not in foreclosure as it was paid for completely by the Atikus and available records showed that no bank loan was involved in its purchase.

The sale of the mansion was not listed as a public auction, which is an auction done under a court order on behalf of government or its agencies.

There is also no evidence that the sale is connected to the now infamous 2005 case or any other unknown criminal investigations.

Paul Ibe, the spokesperson for Mr. Abubakar, said the sale of the mansion was voluntary and strictly an investment decision.

“Atiku Abubakar is a successful businessman who has a long history of real estate investments,” Mr. Ibe said in response to an enquiry by this newspaper.

“The U.S. home was simply one of such numerous investments. The home was no longer serving the purpose for which it was bought. Consequently, it has to be put up for sale via open auction, a growing and preferred method of selling high end properties. The proceeds thereof will be deployed to business aimed at creating jobs.”

Mr. Abubakar has consistently denied any wrongdoing in the Jefferson corruption saga that led to the search of his home.

But the former vice president’s political rivals have always harped on that episode to discredit him.

What is more, Mr. Abubakar, believed to be nursing a fresh bid to become president of Nigeria in 2019 after several failed attempts, has not travelled to the U.S. for a long time. That has fuelled speculations that he might be avoiding a possible arrest or prosecution.

But in an interview with the BOSS newspaper last December, he explained he had made attempts to visit the U.S. but was turned down for administrative reasons.

“I applied but wasn’t issued a visa. However, they did not decline me categorically either. They’ve only said my application is going through administrative process. It is the sole prerogative of America to determine who they want in their country or not. I’m not running away from America,” he said.

The sold property attracted international media attention in 2005 after the FBI videotaped Mr. Jefferson, who was the congressman representing Louisiana, receiving $100,000 worth of $100 bills in a leather briefcase as part payment of a $500,000 bribe allegedly demanded by Mr. Abubakar, who was vice president at the time, to facilitate the award of contracts to some two American telecommunication firms in Nigeria.

On August 2, 2005, the FBI applied for a search warrant from William Connelly, a US judge in Maryland, to search the Potomac mansion.

A day after the affidavit was filed, the FBI raided the congressional office of Mr. Jefferson and discovered $90,000 “wrapped in aluminum foil and stuffed inside frozen-food containers” and hidden in a freezer. The serial numbers on the bill matched those the FBI had given to an informant.

The affidavit filed by FBI special agent, Edward Cooper, in support of the application for a search warrant of the Maryland home further revealed the details of the bribery scandal.

Mr. Cooper told the court that the search of the property was necessary because the FBI has probable cause to believe that the there are evidence of the violations of Title 18 United States Code, Section 201, which relates to the bribery of a public official; Title 18 United States Code, Sections 1343, 1346, and 1349, which deals with wire fraud, deprivation of honest service and scheme defraud.

Mr. Cooper also listed the items to be seized from the mansion as:

2. A new, reddish-brown coloured briefcase retailed or manufactured by Bosca.

3. A reddish-brown coloured cloth bag with two drawing strings on top of the bag.

4. All video recording devices, surveillance videotapes, CDs, digital media or any other electronic devices related to the surveillance of the house grounds, driveway and premises.

5. All recording of visitors to the premises recording arrival, departure or length of stay information.

6. All records, logs, schedule of employees or personnel working at the premises from Monday July 18, 2005 at 6 pm to the present.

8. All records and documents relating to communication to and from Atiku Abubakar and William Jefferson regarding the proposed business venture in Nigeria.

The bribery investigation started in March 2005 when a “cooperating witness”, who has since been identified as a Virginia-based businessman, Lori Mody, approached the FBI after he suspected that he had been a victim of a fraudulent scheme involving Mr Jefferson, Vernon Jackson, and Brett Pfeffer.

Mr. Mody told the FBI that he suspected that the trio were scheming to defraud him of $3.5 million using Mr. Jackson’s company, iGate Incorporated.

He said he paid the money to Mr Jackson, who had developed a technology that could enable the transmission of data, audio and video through copper called “Triple Play”, for its reacquisition from another company which had acquired it from iGate. However, Mr. Jackson, after collecting the money, could not produce proof that he had reacquired the technology.

He also told the FBI that Mr. Jefferson promised to assist him with his business dealings in Nigeria for a percent share of his business, which he directed to be issued in the names of his children.

The FBI revealed that Mr. Jefferson had already received a 30 per cent equity in a Nigerian company controlled by Mr. Mody in exchange for promoting communication equipment and services offered by iGate in Nigeria. Mr. Jefferson also requested that the 30 per cent stake be placed in a Nigerian company controlled by his children.

He was expected to use his influence to communicate with the Nigerian president and vice president to secure the business venture for iGate. The FBI said he wrote to Mr. Abubakar seeking his assistance in overcoming opposition to iGate’s business venture from the defunct Nigerian Telecommunications Limited (NITEL).

“With regard to the Nigerian business venture, Jefferson has discussed the making of payments to high-ranking government officials there including the Vice President of Nigeria,” the affidavit stated.

“Congressman Jefferson met with the Vice President of Nigeria on July 18, 2005 in Potomac, Maryland. At the meeting the Vice President agreed to help secure the necessary approvals for the participants in the Nigerian business venture to commence operations in Nigeria in exchange for at least 50% of profit planned to be received by CW’s (Mr Mody, the cooperating witness) Nigerian partner,” he wrote.

The FBI also claimed that Mr. Jefferson discussed the payment of $500,000 to Mr. Abubakar before the commencement of the Nigerian business operations. Video surveillance taken on July 30, 2005 at the Ritz-Carlton Pentagon City indicated that Mr. Jeffeson collected $100,000 in a leather briefcase (a reddis-brown Bosca briefcase) from Mr. Mody, which he allegedly claimed was to be given to Mr. Abubakar to secure his support for the Nigerian business venture.

Two days later, Mr. Jefferson told Mr. Mody that he had delivered what he described as the “African art” to Mr. Abubakar in the early hours of July 31, 2005.

Mr. Jefferson had originally suggested, in one of the two meetings with Mr Mody, where the possibility of bribing Mr. Abubakar was discussed, that the alleged bribe should be paid into a foundation run by Ms. Douglas.

On the evening of July 18, 2005, the FBI stated that Mr. Jefferson visited Mr. Abubakar and Ms. Douglas at their Potomac mansion and held a private meeting with the former vice president for approximately an hour.

At the end of the meeting Mr. Jefferson met with Mr. Mody at a restaurant and told him that Mr. Abubakar agreed to help with securing the necessary approval for NITEL to participate in the iGate venture for a share of the profit to be earned by iGate’s Nigerian partner, Rosecom (Rosecom has a 25 per cent stake in the business) expected to earn from the business and a $500,000.00 described as “front end” payment.

Mr Jefferson also suggested that the money could be sent to Mr. Abubakar through an investment in the stock market.

When eventually searched, no money was found in Mr. Abubakar’s home, indicating Mr. Jefferson simply kept the bribe money to himself.

Ms. Douglas, also known as Jennifer Iwenjiora, Jamila Abubakar, and Jennifer Douglas-Abubakar, met Mr. Abubakar in the 1980s when she was a television reporter with the Nigerian Television Authority (NTA).

They dated for a while but lost contact when she emigrated to the U.S. While in the U.S, she married and took the name Douglas but was later divorced and became a naturalised American.

They were reunited in the early 1990s and resumed their relationship. Mr. Abubakar spent a considerable amount of time with Ms. Douglas in Maryland during the regime of late dictator Sani Abacha between 1995 and 1998. Mr. Abubakar was one of those who was persecuted by Mr. Abacha – his stake in logistics company, Intels, was stripped off him on the orders of Mr. Abacha.

The Senate committee, whose mandate was to investigate the flow of suspicious funds into the U.S., revealed that between 2000 and 2008 Ms. Douglas helped her husband bring in over $40 million in suspected illicit funds into the U.S through wire transfer from offshore corporations.

In 2008 a civil inquiry by the U.S. Securities and Exchange Commission claimed Ms. Douglas received over $2 million in bribe payments in 2001 and 2002, from German technology company, Siemens AG.

Though she denies wrongdoing, Siemens pleaded guilty and settled bribery related civil charges and told the Senate committee that the money was sent to her account.

According to the U.S. Senate report, she approached the authorities of the American University, where she was a student in 2002 for assistance in the setting up of the university and served as a liaison between the institution and her husband. She is an unpaid trustee of the university’s board of trustees.