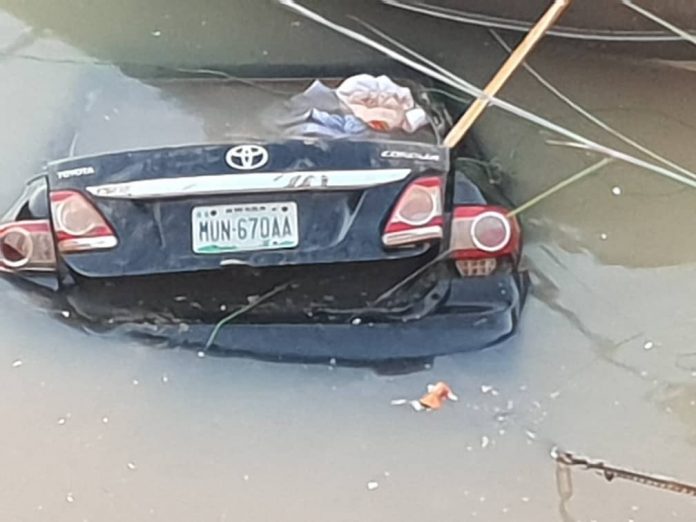 The car of missing Major General Idris Alkali has been found in a pond in Dura-Du, Jos South,  eight days after the commencement of an intense search  by the Nigerian Army.

The car registered as MUN-670-AA Kwara State,  was pulled out of the pond  about 7 p.m, with the  combined effort of NEMA, the Fire Service and local divers.

The pond yielded other shocking secrets: four other cars were also found inside it.

Major General Augustine Agundu, Commander Special Task Force, told journalists  that the search started on September 22 at the site after receiving intelligence reports about the location of the vehicle.

Agundu explained that the missing General was caught up in a fracas at Dura-Du when irate youths blocked roads and attacked travellers following an attack in the community on September 2 where 13 persons were killed.

“We started this search on September 22 when we were ordered by the Chief of Army Staff to find the missing General.

“We recall that on September 2, the Du District was attacked by bandits where 13 were killed and others sustained injuries.

“The General, who just left service after 35 years, was travelling to Bauchi and he drove himself having left service. Unfortunately, he ran into the irate youths who blocked the road.

“We got information about his movement and swung into action to find him. We got intelligence report  and convinced ourselves that this pond was where he was dumped.

“There are about 32 abandoned mining sites in this community but to single this one out,  you must know a lot of intelligence gathering was done.

“On the first day of operations,  some organised women resisted our operations claiming the pond was their source of drinking water and ancestral water but they were all lies.

“This pond  contains a lot of hidden secrets. There are four more cars that we have discovered to be inside for now. We are determined to unveil  all the secrets in it, he said.

The GOC, 53rd Army Division, Maj. Gen. Benson Akinroluyo, while confirming the discovery, said that the car belonged to the missing general. He said Alkali’s body has not been found.

Akinroluyo said that the search for the body will continue immediately and advised members of the community to go about their lawful duties. He  stressed that the army will not intimidate them on the findings.

“The vehicle is indeed that of missing Major General  Alkali. We have not seen the body but the plate number on the car is his own.

“The Army T-Shirt found has his name tag on it. So, I can confidently confirm all these we have found here belongs to him.

“The army is a professional body which carries out its operation according to best practices and human rights. We will not arrest anyone not involved.

“Our intelligence pinpointed where his vehicle was pushed to. So, you will know that we have credible intelligence on who and who is involved and we will get them arrested,” he said.