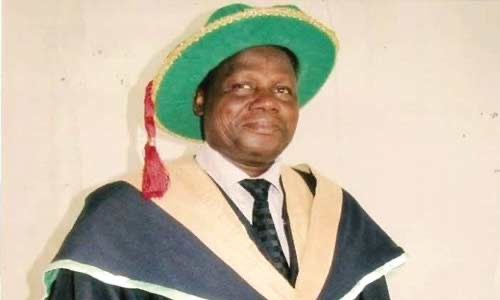 An astute legal luminary of repute, he was born on 16 April, 1964 at Ilorin in Kwara State. His educational career started at the Trinity Nursery and Primary School in Ilorin in 1973 before he proceeded to undertake his secondary education at Okene Secondary School, Okene, Kogi State and upon completion, he proceeded to the Kwara State Polytechnic, Institute of Basic and Applied Sciences for his A/Level. The success gathered from this endeavors earned him a place at the prestigious Ahmadu Bello University, Zaria, where he bagged an LLB Degree in 1990 and later proceeded to the Nigerian Law School to qualify as a Barrister after his Call to the Nigerian Bar 1991.

Not satisfied with an LLB and BL, Prof. Amuda-Kannike enrolled for his LLM Degree with the Rivers State University of Science and Technology and concluded his programme in Year 2000. To add more feathers to his cap, his courageous feats endeared him to climax his academic achievements with a PhD. in Commercial Law from Southland University, California, in United States of America, after which he proceeded to the University of Nigeria, Nsukka for a second PhD in Law, with specialization in International Law and concluded same in March 2017.

Prof. Amuda-Kannike is also a renowned legal icon having appeared and succeeded in very critically tasking cases that shaped the legal landscape in Nigeria. His experiences and practice in Law know neither boundary nor limits and attest to this, he was made a Senior Advocate of Nigeria (SAN) in year 2014.

A well-grounded academic, Prof. Amuda-Kannike has taught Law in the extension programme of the following Institutions, the Polytechnic, Calabar, University of Calabar, University of Jos and the University of Port Harcourt. He is formerly an eminent scholar of repute in Poma International Business University, where he was the Dean, Faculty of Law (Republic of Benin Campus and Dubai, UAE Campus). He was appointed Professor of Law by Poma International Business University in June, 2016 and in addition was also appointed to the Rank of Professor of Law, by the Pacific Western University, Denver, State of Colorado, USA in 2017. He was a Lecturer at Niger Delta University, Bayelsa State, from 2006 till September 2016. He is still lecturing and supervising final year Law students at the National Open University of Nigeria, NOUN Port Harcourt study Centre. His teachings and researches have been of immense benefits to these Institutions and students, most especially, his research candidates