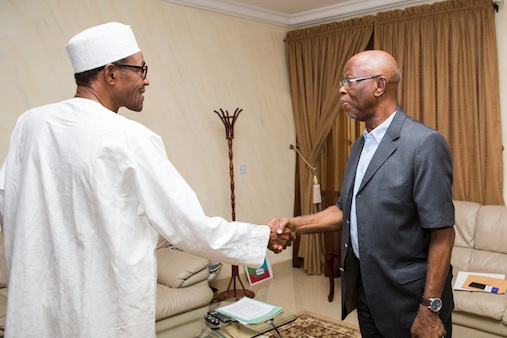 The National Executive Council (NEC) of the All Progressives Congress has extended the tenure of its National Chairman John Odigie Oyegun, its National Working Committee (NWC) and other executives by one year, effective from June this year.

This decision was reached at the NEC meeting in Abuja on Tuesday.

Senate president, Bukola Saraki and the Speaker of the House of Representatives, Yakubu Dogara were however absent at the meeting.

Saraki was also absent on Monday night when President Muhammadu Buhari hosted the APC caucus at the presidential villa in Abuja.

However, Governors, Ministers and top members of the ruling party were at the meeting which held at the headquarters of the party in Abuja.

The Forum of APC State Chairmen, during their meeting on Monday ahead of the NEC meeting had “unanimously resolved” to propose a two-year tenure extension for Oyegun.

The APC in a statement by Bolaji Abdullahi, its National Publicity Secretary said: “At the end of the 5th meeting of the All Progressives Congress (APC) National Executive Committee (NEC), it was generally agreed by members to extend the tenure of all elected and appointed officers of the Party in the 36 states, the Federal Capital Territory (FCT) and the national level.

“By this decision, all affected officers will continue in acting capacity for another period of 12 months after the expiration of their current term.