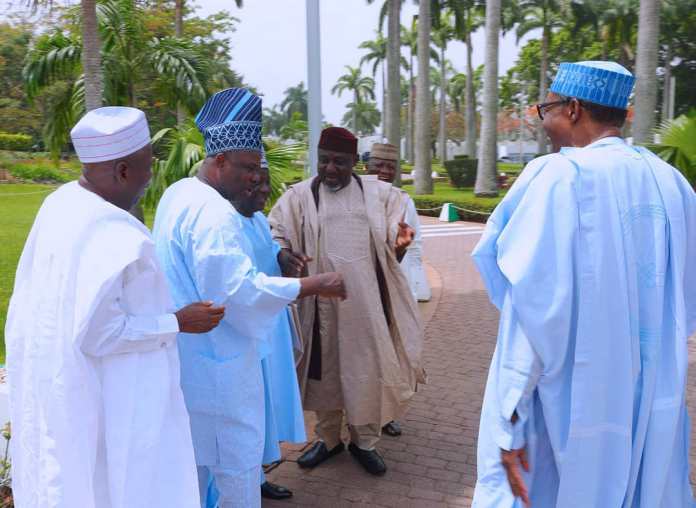 Governors of the All Progressives Congress (APC) have finally resolved their differences on the position of President Muhammadu Buhari regarding the extension of the tenure of party officials.

The decision followed the second meeting between Buhari and the governors in his office on Wednesday.

The president on Tuesday met with the governors over his decision to oppose tenure elongation for national and state APC officials.

Mr. Buhari, last week, told a meeting of APC National Executive Committee (NEC), that its earlier decision to extend the tenure of the party’s officials by one year was against the APC constitution and that of Nigeria.

Tuesday’s meeting deadlocked as the governors remained divided on whether to support the president’s new decision or not.

The governors later met alone Tuesday night after which they returned to the presidential villa to meet with the president.

Speaking with journalists after the meeting, Governor Abdulaziz Yari of Zamfara State said, “Gentlemen of the press, you know yesterday, we left you in the dark after the meeting and today, we have seen so many captions that there is disagreement between the governors over the issue of party Chairman or about the party leadership.

“No. We had a meeting with Mr. President yesterday (Tuesday), and we extended the meeting today and we followed up with the consultations with the president now.

“So, therefore, we collectively agreed that we will have congresses at all levels – local, state and national”.

The national chairman of the APC, John Odigie-Oyegun, had also on Tuesday, inaugurated a 10-member committee headed by the governor of Plateau State, Simon Lalong, to advise the party on the proposal by the President.

The Zamfara state governor said they will also meet with the National Working Committee of the party today to look at the possibility of setting up a national convention committee as well as a timetable for the congresses.

“So, there is no deadlock in our meeting, we have progressed and very soon you will have the names of the convention committee members as well as the timetable,” he said.

The chairman of APC governors forum, Rochas Okorocha of Imo state said there was no crisis in the APC.

“We want to use this opportunity to advise the media operatives to stop spreading rumours of crisis in APC. There is no single crisis in APC.

“The issue was one of the people who believe that we did not have enough time to organise a party congress and run the election.

“Some people felt that it was a good idea but the most important thing is that, if we do that we will be contravening both our party constitution and the constitution of the Federal Republic of Nigeria. That is the major issue that we have that they call crisis. We do not have virus,” he said.

Mr. Okorocha said the decision to hold congresses does not mean the Oyegun-led NWC has failed.

“We are simply saying that their tenure has ended and those who wish to re-contest can re-contest and can be elected into our party structure. So we are all one as a family and we are set to go for 2019 elections in victory,” the Imo state governor said.

No northerner qualified to rule Nigeria than Buhari – NAF

2019: ‘I can run Nigeria better than Buhari even in my sleep’ – Sowore