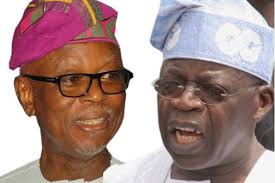 A leading member of the All Progressives Congress, APC, chief Sam Nkire, has warned the party Chairman, John Odigie-Oyegun, and its National Leader, Asiwaju Bola Tinubu, against washing the party’s dirty linen in public.

Chief Nkire gave the advice yesterday when he addressed reporters in Abuja, calling on the party’s leaders; especially the two bigwigs whose disagreement had been made public, to perish the idea of taking issues to the press.

He said, “This can only make our opponents giggle at our misfortune.”

Nkire, a former National Chairman of the Progressive People’s Alliance, PPA, pointed out that party administration was “like any other corporate management effort which required that its image be considered as important as the product of the corporate entity, if not more.”

He went further to note that party administration was not a task for a select few or sole administrators but that it was a team work which involved more public participation than what was available in some of the world’s largest public-quoted companies.

The APC chieftain added that excluding the opinion of other leaders and members of the party in decision making was bound to inflict internal injury. He said, “if care is not taken, it could develop into a noticeable external sore.”

He said in all his many years of political life and party administration he had come to the singular conclusion that the shortest route to achieving cohesion in any political party was “inclusiveness.”

Nkire added that the main reason why party administrations were set up was solely for solving problems within and outside the party.

PDP not known to have succeeded in anything – Aregbesola