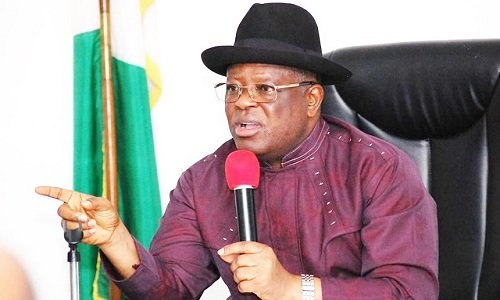 Governor David Umahi of Eboyi State on Friday accused former Secretary to the Government of the Federation, Anyim Pius Anyim, and former governor Sam Egwu of plotting to unleash mayhem in the state.

The duo and other leaders of the Peoples Democratic Party (PDP), according to Umahi, plan to recruit cultists and members of the proscribed Indigenous People of Biafra (IPOB) to maim and kill.

The governor spoke in Abakaliki, capital of the state, shortly after a security meeting at the Government House.

He vowed to meet force with force if they test his will.

He alleged that Anyim and his cohorts were fond of fighting successive governors in the state, and warned that the state does not exclusively belong to anyone or group of persons.

According to him, while no one is forcing them to join the All Progressives Congress, his government would not fold its hands and watch them brew crisis in the state.

“I want the press to note that I reported an allegation of some Ebonyi people that are engaging cultism, and according to them, some IPOB members to start killings and crises in Ebonyi State in the name of fighting Ebonyi State Government and the governor, and their leader is Senator Anyim Pius Anyim, and their members are Dr. Sam Egwu, Senator Ogba, Mr. Ali Odefa and others.

“This is alleged information I got and I needed to share this information with the security agencies, and the reason is that every governor in this state has been fought by the same set of people.

“I am not saying this information is true or not, but when I am told that lives will be lost, I need to raise the alarm, and I am praying to God that it will not be true.

“And I have asked the security agencies to reach out to them. Their party will exist peacefully in the state and nobody is going to harass them. But it is important to put them on notice that this is what we heard. May be true or may not be true, but a stitch in time saves nine.”

The Governor also directed the security agencies to intensity full implementation of the policy on the prohibition of the use of police escorts, sirens, tinted glasses and covered vehicle number plates by unauthorised persons in the state.

He alleged that the same set of people employ their police escorts and other undeserving paraphernalia to intimidate members of the public, thereby creating unnecessary panic in their localities.

ASUU agrees to call off strike, to receive N70bn