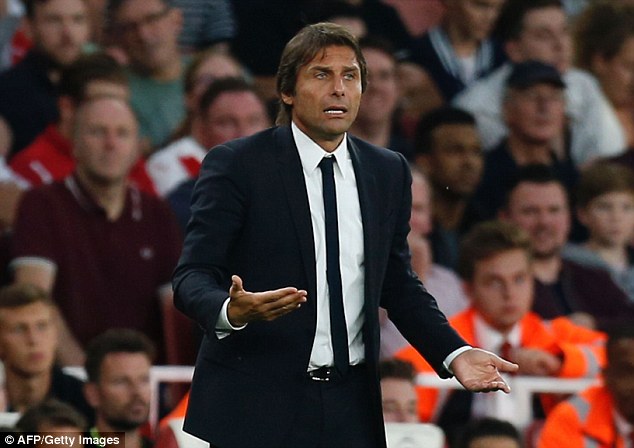 Antonio Conte is ready to launch a ruthless defensive clear-out following his side’s calamitous 3-0 defeat by Arsenal on Saturday.

Branislav Ivanovic and central defender Gary Cahill, at fault for Arsenal’s first goal, are expected to be phased out as the Chelsea boss looks to bolster his back four, who have conceded 12 goals in just four games.

The pending returns of skipper John Terry and fellow centre back Kurt Zouma from injury will provide more options for Conte in the coming weeks.

But with 35-year-old Terry’s career drawing to a close, Conte has his eye on signing a new full back and two centre backs.

Conte failed to land his top defensive targets in the summer – Leonardo Bonucci, of Juventus, and Kalidou Koulibaly, of Napoli. He eventually added left back Marcos Alonso and David Luiz, who returned to the club from Paris Saint-Germain.

But Conte still believes he needs to increase his options at the back in the next two transfer windows.

Sportsmail highlighted earlier this month how the club had begun a scouting drive to identify the best emerging home-grown central defensive talent.

Burnley’s Michael Keane and Middlesbrough’s Ben Gibson are two that have been watched extensively by Blues scouts.

Conte was visibly agitated following the damaging defeat at the Emirates Stadium when questioned about his side’s shocking display at the back.

‘Was I angry at half-time? Yes, but I prefer to keep my words, because it’s right when I talk with my players, to keep what I tell them,’ Conte said.

‘After this game, this defeat, it’s normal for me not to sleep. I reflect. And it’s important to reflect.’

The defensive meltdown against their London rivals prompted Conte to deliver a warning to his players about living on their reputations.

‘Last season was a bad season. We must have last season present in our mind to not repeat the mistakes. We must reflect a lot to find very soon the right way.’

The Blues can attempt to discover that right way on Saturday with a trip to Hull at the KC Stadium.