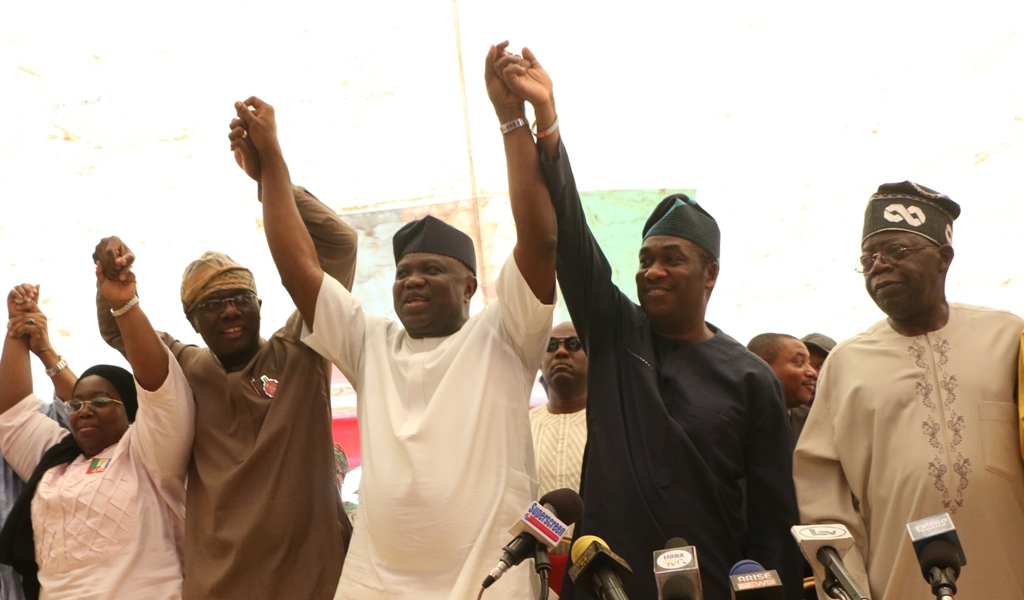 Lagos State Governor, Mr. Akinwunmi Ambode on Monday officially endorsed the governorship candidate of the All Progressives Congress (APC) in the State, Mr Babajide Sanwo-Olu and his deputy, Dr. Obafemi Hamzat, saying that the duo were prepared for the campaign and ready to take on the task of moving the State to greater heights.

The Governor, who spoke at a stakeholders’ meeting held at the State secretariat of the party on Acme Road in Ogba, raised the hands of Sanwo-Olu and Hamzat before scores of party leaders and faithful and wished them well in the March 2, 2019 election.

“As we are looking forward to February 16, 2019, we know it is the Buhari/Osinbajo ticket that the whole of Lagos will vote for. As we proceed two weeks after on March 2, we also declare that it is the Sanwo-Olu/Hamzat ticket that will come to take over from me by the special grace of God.

“I pray for them and bless them that they will take over from me successfully in good health and in good spirit,” he said.

He urged those still aggrieved with the fallout of the primaries of the party to follow his example, and accept the party’s supremacy.

“The first thing I want to say is to appeal to all our party members who, in one way or the other, have been wronged or aggrieved that they should find a place in their hearts to let it just be the same way that I have accepted the greatness of the party.

“I want us to know that the party is supreme to all our individual interests because it has the common good for all of us and we must find a place in our hearts to let the party reign supreme,” he said.

The Governor also appealed to the leadership of the party to go a step further by looking for avenues to compensate aggrieved aspirants, saying such was necessary to spur them to work for the party and also move the party forward.

According to him, “I want to further appeal to all our leaders and our party leaders also that when there is a platform for reconciliation, we should proceed also to continue to reconcile and when there is a platform for compensation, we should also make those promissory notes so that all our aspirants who are not candidates must be ready to sacrifice for the overall collective of our party.

“We are one party and we are one family and if we are one family and one party, then we should proceed and make APC the reigning party at the centre and the reigning party in Lagos. So, all our stakeholders, all our elders I seek for your cooperation, your solidarity and your support for our candidate at the gubernatorial level, senatorial level, House of Representatives and Assembly and also Presidency,” Governor Ambode said.

The Governor, also urged Lagosians to vote massively for the reelection of President Muhammadu Buhari and Vice President Yemi Osinbajo come February 16, 2019 for continuation of the good works in the country.

National Leader of the party, Asiwaju Bola Ahmed Tinubu, on his part, commended the courage of Governor Ambode and others for accepting the outcome of the primaries of the party,saying their act of sportsmanship deserved to be appreciated.

Tinubu said Ambode, his deputy, Dr.Idiat Adebule, and all the leaders and members of the party had done commendably well in respecting the supremacy of the party.

Addressing the gathering which was attended by key leaders of the party in the State, Tinubu said: “I want to say thank you to all of you and God bless you. I thank all of you for respecting the party, particularly the present Governor, Akinwunmi Ambode and his deputy, Idiat Adebule. May God continue to bless you and guide you and you will livelong with everlasting progress.

While recalling that the direct primary option adopted for the shadow election of the party was taken after a GAC meeting, Tinubu said it was gratifying that all members of the party accepted and endorsed the decision, adding: “I want to thank you for maintaining peace, harmony, unity and love.”

He said having crossed the hurdle of the primaries, it was now time for all members of the party to unite and maintain a strong outing for APC during the 2019 general elections, saying APC remains committed to Nigeria’s progress, development and economic transformation.