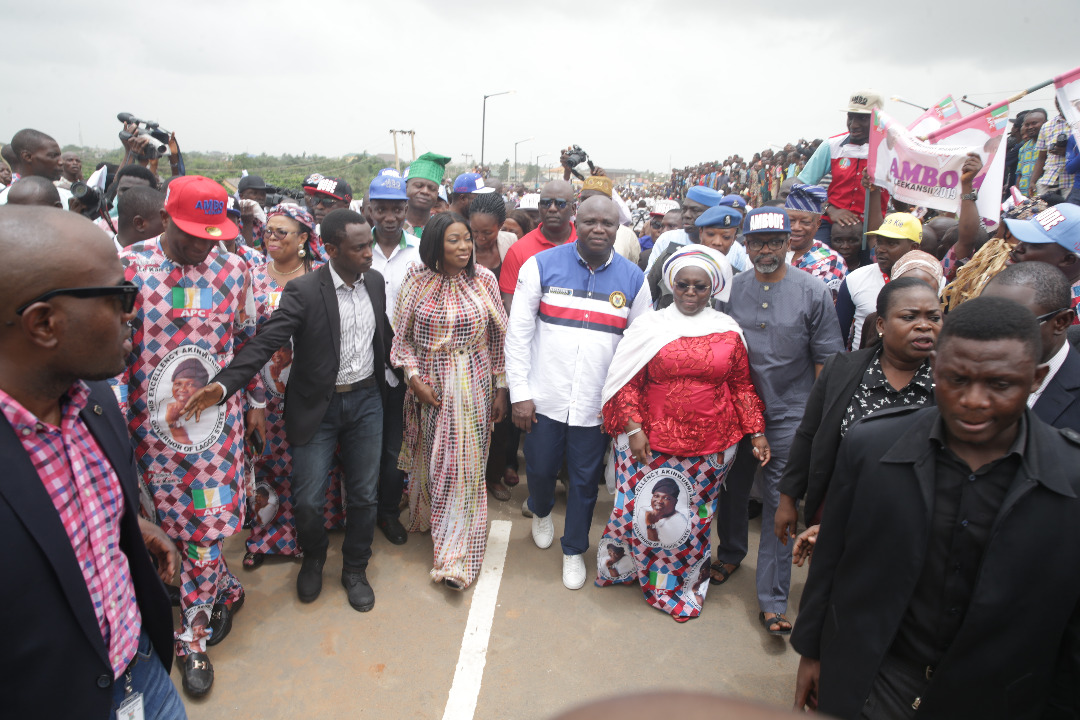 Lagos State Governor, Mr Akinwunmi Ambode on Monday commissioned 21 network of roads and two bridges totalling 27.4 kilometre in Alimosho Local Government, with a pledge to further develop other communities within the axis.

Governor Ambode, who commissioned the projects amidst celebration by elated residents in four different locations, said the delivery of the infrastructure was part of the continuous bid to transform the Alimosho federal constituency and build new economy around the axis.

“This is what is called dividend of democracy we are making this Alimosho axis economically viable and also liveable. We don’t need to travel anywhere to earn a living. By opening up the whole network stretching 27.4km, we have brought economy back to this place. With the walkways, street lights, these communities are becoming safer and there is more to do. By expanding the axis here, you can travel without necessarily going to the main street and go to Ojo or Badagry, that’s what your vote was for and that’s why we are returning back here, all the promises that we made and we are keeping them,” he said.

While describing the commissioning as historic and momentous, Governor Ambode particularly lauded the National Leader of All Progressives Congress (APC), Asiwaju Bola Ahmed Tinubu for activating the transformation of Alimosho when he was Governor of the State with the construction of LASU-Iba Road, and former Governor Babatunde Fashola for taking the project up to Ipaja.

He said: “What we are doing today is so historic and of great importance that we must send the message rightly so that people can understand why we are celebrating on Easter Monday the change in the life of our people which the resurrection of Christ symbolizes.

“First, we salute all our political leaders starting with Asiwaju Bola Ahmed Tinubu for starting the vision of making Alimosho a place of pride with the construction of LASU-Iba Road such that when you move from Badagry and you enter into LASU-Iba Road up to Igando, Egbe and so on, you have easy transportation and easy life. My predecessor, Governor Raji Fashola took it up to Ipaja all in a bid to build a new economy in this particular axis.

“We have taken it from Ipaja to Ayobo, Command Secondary School, Gate, Abesan, Aboru Bridge and roads. What we are doing today is momentous as we are connecting over 60 communities together and we are happy to do this.”

Enumerating the significance of the projects, Governor Ambode said the roads were a veritable alternative routes to decongest traffic from the Lagos-Abeokuta Expressway, and could be used to access Ipaja up to Badagry without using the expressway.

“It is an alternative route; we don’t need to congest ourselves on the Lagos-Abeokuta express when you drive from Gateway Hotel and start driving through Ojokoro, Ipaja and so on. Now, you can take this alternative route and go all the way to Ipaja and Badagry without having anything to do with the expressway,” the Governor said.

He said the government was able to complete the projects using the taxes paid by the people, saying that it was the taxpayers that made it possible for his administration to improve on the economy and solve traffic challenges in the axis.

“So, when you understand what this is all about; it was not done with Akin Ambode’s money; i did not put a kobo there apart from my own taxes; it is the taxes that you have contributed that we have used to improve on this particular economy and my message is that we should make every part of Lagos economically viable and also livable so that all the people in this area can have the same kind of life that others are enjoying in the other axis of Lagos.

“The idea of the project is to open up all our sub-urban communities, reduce traffic congestion and then create better life for the people,” Governor Ambode said.

Responding to request for more infrastructural projects in Alimosho, the Governor said as part of the continuation of the development of the axis, the State Government will Dredge Ilo River, rehabilitate Adekoya Road, Makinde Road, Subaru Oje Road, Old Ota Road and Ishefun-Ijan Road which will be connected to a Jetty through which people can take a boat ride to connect Lagos Marina in twenty minutes.

He also said that a modern Bus Terminal and Bus Rapid Transit (BRT) corridor would soon be constructed in the axis.

“We would do more. Based on the budget for 2018, there are more infrastructure that we have to put in this community. You deserve a bus terminal, you also deserve BRT and you would get it. We deserve more commerce and we want to do economic integration of all the South Western States and the nearest to us is Ogun State and that’s why we are expanding the road network to enter into the boundary of Ogun State.

“We will do it between Epe and Ijebu Ode also to enter into the Ijebu-Ode Ore Express road. That is what economic integration is, that is how to expand commerce, that’s how to create jobs for our people and by this project people in this community will benefit from the jobs and also benefit from the commerce and that is what inclusive governance is all about,” the Governor said.

Besides, Governor Ambode urged residents of the State to go out to register and collect their Permanent Voters Cards to be able to exercise their franchise come next political dispensation.

Speaking at the commissioning of Aiyetoro Bridge, Senator representing Lagos West Senatorial District, Olamilekan Adeola, said the Governor had surpassed the expectations of Lagosians, noting that many residents in the area who had left years ago are returning to the axis due to the massive infrastructural renewal by the present administration.

“Your Excellency, we are assuring you of giving you one million votes in the coming election from Alimosho alone because if we should look at it during this your administration, Alimosho uses to be one of the great beneficiary.

“Alimosho local government uses to be one of the biggest beneficiaries. Today alone, 21 roads with two bridges. We have commissioned many in the past. One of the longest bridges after the Third Mainland was also commissioned in this Alimosho Local government last year.

“You know Alimosho used to be called Tinubu Home Country but now it is Ambode’s destination abode we are taken aback and marveled with the level of work done you have done in Alimosho Local government,” Adeola said.

CODELAGOS: 15,000 Trained As Ambode Approves Next Phase Of Initiative With 5,000 Coding Centres To Open This Year

No Going Back On Making Lagos Waterways Cleaner, Safer – Ambode