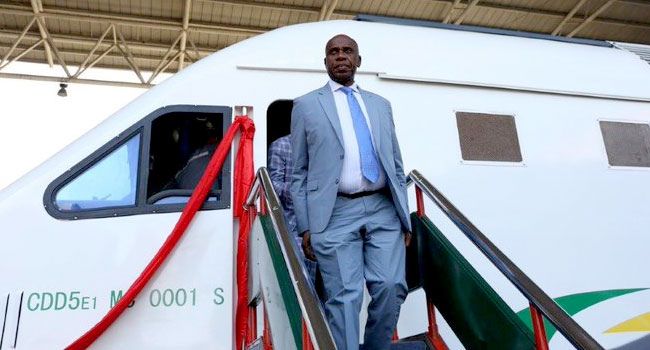 Rotimi Amaechi, minister of transportation, has announced a free train ride from Lagos to Ibadan.

In a tweet on Saturday, Amaechi said the take-off point will be from Iju, and that the rides will run until March, 2020.

He asked commuters to take advantage of the free rides during the festive season.

“Our free rides on the Lagos-Ibadan standard gauge rail line will begin today and run through March, 2020,” he tweeted.

“Commuters on that route can take advantage of it and save on transportation during the festive season and beyond. Let’s ride to the #NextLevel.”

During the inspection of the project earlier, Amaechi said it was the wish of the government to begin free rides in Lagos-Ibadan standard gauge rail-line.

The minister inspected the project in the company of Gbémi Saraki, minister of state for transportation.

He said he put pressure on the contractor to ensure that the minor stations were completed in due course.

“We know that by January next year, they are going to finish both the minor and major stations so that we can move on,” Amaechi had said.

“They need to increase their speed. They reduced their speed within the period the government dissolved the last cabinet.

“Now that we are back, my colleague, the minister of state, and I had resolved to push back the pressure to ensure early completion.

“Our ambition is that by November, we should begin trial if train services between Lagos and Ibadan for free.”

Diezani’s husband: I told my wife to maintain family’s good name not focus on money