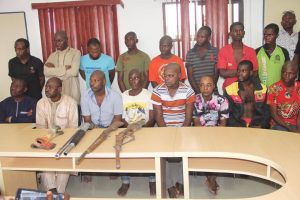 A Senior Magistrate Court sitting in Lokoja, Kogi State has granted the police an order to take custody of Alhaji Abdulahi Ibrahim and 15 other suspects being investigated for alleged possession of human parts.

The court presided over by Mrs O.R. Haruna made the order while ruling on an exparte application for a remand order filed before the court by the state Commissioner of police on Oct. 15.

Haruna said that the police prosecutor , Mr Theophilus Oteme had disclosed probable cause for remand of the suspects in the seven-paragraph affidavit sworn to by one Sgt brahim Ademola and attached to the application

“ In effect, the application is meritorious and same is granted as prayed ,” the court ruled.

She ruled that the suspects be remanded in the custody of the Tactical Squad of the Nigeria Police Force, Abuja, adding that the case be returnable on Oct. 29.

The police had on Oct. 12 in Abuja paraded the suspects and Ibrahim who is also the APC candidate for the Omala/Ankpa/Olamaboro Federal constituency election in 2019 for allegedly trading in human parts.

Ibrahim , a former member of the Kogi State House of Assembly is also the owner of a popular hotel in Lokoja, the state capital.

Police was yet to formally charged them for the offense. The remand order obtained by police was to allow for conclusion of investigation into the matter.