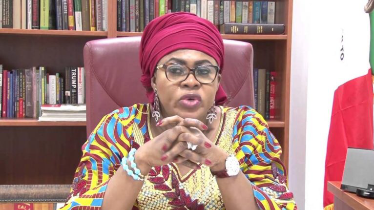 A Federal High Court, Abuja, on Monday, threatened to issue a warrant of arrest against former Aviation Minister, Stella Oduah, if she failed to appear in court by the next adjourned date.

Justice Inyang Ekwo gave the warning after Dr Hassan Liman, counsel to the Economic and Financial Crimes Commission (EFCC) in the alleged N5 billion trial against Oduah and eight others told the court that the former minister and one other defendant were not in court to take their plea.

The News Agency of Nigeria (NAN) reports that the court had earlier fixed Feb. 9 for the arraignment of the former minister and eight others.

But due to the fact that Oduah, who currently represents Anambra North Senatorial District at the National Assembly, was not served with the court processes then, the arraignment could not go on.

The court also fixed April 19 for the arraignment but due to the strike by the Judiciary Staff Union of Nigeria (JUSUN), the matter could not hold.

The lawmaker is facing a fraud charge alongside others in a suit with number: FHC/ABJ/CR/316/20.

The anti-corruption agency is alleging that Oduah misappropriated public funds to the tune of N5 billion while serving as Minister of Aviation.

When the matter was called, Liman, who informed that the case was scheduled for arraignment, said the anti-corruption agency had carried out the court order made on Feb. 9.

“On Feb. 22, 2020, my lord made an order of substituted service on the 5th and 6th defendants in the trial.
“We have carried out the order my lord,” he said.

Justice Ekwo, however, said that since the court did not sit on the last adjourned date, today’s proceeding should be for a report on the development and another date would be fixed for arraignment.

“How many witnesses are you calling,” the judge asked.

Liman, who said the EFCC would be calling at least 32 witnesses in the trial, said while some of the witnesses were within the court jurisdiction, others were not.

He added that the agency would produce two witnesses in the first day of trial commencement.

The lawyer called the court attention to the fact that Oduah, who is the 1st defendant, and another defendant listed as 4th in the trial were not in court.

“I will fix another date for arraignment and if they like, let them not come,” Ekwo said.

The judge, who told the prosecution lawyer to put his house in order, said “once the plea is taken, I am proceeding with trial.”

Ekwo, therefore, warned that any defendant who was not in court in the next adjourned date would be issued with an arrest warrant.

“Apart from the 2nd and 3rd defendants, the order defendants are absent today. This is a note of warning that any one who is absent will be issued with a warrant of arrest,” he ruled.

He adjourned the matter until Oct. 19 for arraignment and trial.