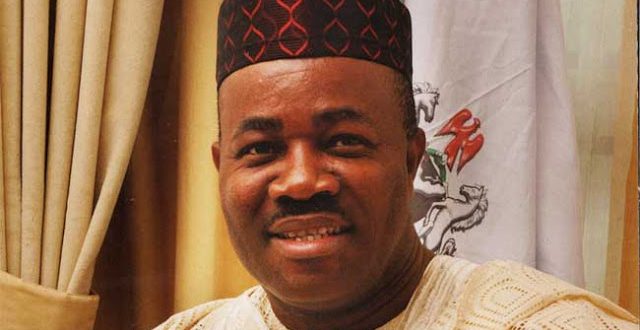 Godswill Akpabio, former minority leader of the senate, says he is sure his colleagues in the Peoples Democratic Party (PDP) are missing him.

Speaking during the valedictory session of the 8th senate, the senator who defected from the PDP to the All Progressives Congress (APC) in August, described his stay at the senate as “happy and sad”.

Akpabio said the experience was mixed because some of his colleagues died before the end of their tenure.

He congratulated the 8th assembly for “remaining focused” despite turbulent times, saying he would join the 9th senate as soon as “I reclaim my mandate”.

“I want to start by apologising to my colleague in the Peoples Democratic Party (PDP). I know they are missing me but I want to apologise to them for the way and manner I moved to join Mr president to stabilise Nigeria,” Akpabio said.

“I thank the entire 8th senate for giving me the opportunity to be the minority leader, and to make history as the first senator since 1999 to be given the role of a leader in this hallowed chamber.

“My President, you and I know that I have forgiven you if you wronged me, even as we are departing from here, if there is still need, you can see me outside after. In the entirety of the senate, I want to thank all of you for indulging me, for particularly tolerating me. Where I went wrong, please forgive me.

“Let me say this, the 8th senate achieved a lot, despite turbulent periods, we remained focused. We made sure that the interest of Nigeria came first.

He also enjoined the next senate president to create a level playing field for all the senators and urged the 9th senate to reform the electoral act.

“My president, you indulge some of us too much. I want the next senate president to “give a level playing field to all because the senate is a leveler. Once you come here, you are all distinguished colleagues,” Akpabio said.

“I want the next senate president to ensure that there is a level playing field; if you give two minutes to me, give two to Dino (Melaye), let Dino not take 10 minutes and when it is my time, you tell me it is time up as though …I’ll raise my hand for a long time and Dino will walk in and be recognised. This disparity should be checked.

“In the 9th senate, it is time to reform the electoral act, we must make sure that every vote counts in Nigeria. A situation where the electoral umpire becomes so terribly biased that people, even in the face of carry go, the political party won’t matter, they will not take that into cognisance.”

Peterside: Nigeria will soon export crude with its national fleet