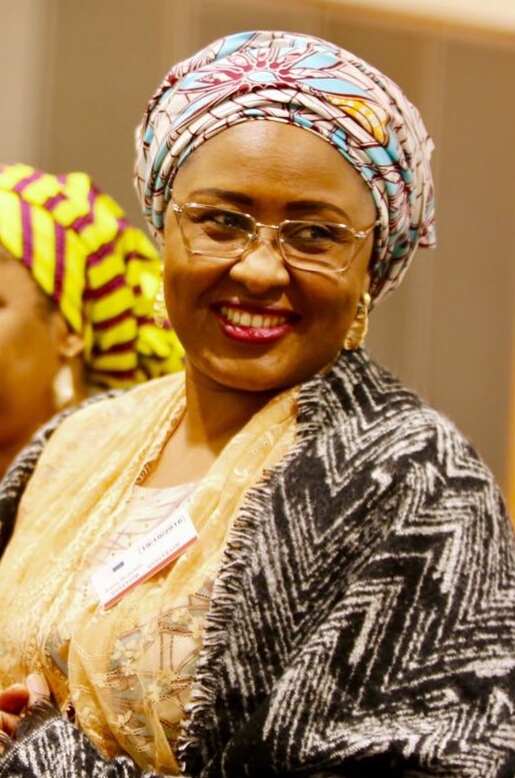 Wife of Nigerian President Muhammadu Buhari, has roared and there has been a lot of scattering in London in apparent reaction to the Hyenas and jackals.

Madam Aisha, sources said, has finally and firmly put her feet in the right boots and is stamping her authority, and it seems the juju could not cross the water.

Information at our disposal has it that it was the wife of the President, who organised the recent visit of the Governors from both the All Progressives Congress (APC) and the Peoples Democratic Party (PDP) to see President Buhari in London.

Our informants also revealed that in apparent defiance to all her detractors, Aisha has been on the prowl and a lot of casualties have fallen by the wayside.

We were reliably informed that the President, who is hale and hearty now, does not receive visitors without express permission of Her Excellency.

“Tunde Sabiu, the Personal Assistant to the President (an informer of the cabal and who has fallen out of the good books of Mr President due to the uncovering of some shady deals) has been seriously cautioned about abuse of power and nobody sees the president behind her back

“Contrary to reports by mischief makers, who are trying to create a rift between the President and his Vice, now the Acting President, Yemi Osinbajo, President Buhari has utmost confidence in his dealings and they are in constant contact, that is why the Minister of Aviation, was turned back and not allowed to see the president in London.

“President Buhari insisted proper protocol must be followed and since he handed over properly to Professor Osinbajo all issues should go through him,” said a source.

First Weekly was informed that right now the cabal led by Mamman Daura is going through agony and in disarray as were told that he is no more staying in Abuja house, and that his official vehicle had been withdrawn and he has only been able to have access to the President thrice since the arrival of Aisha over a month ago.

“Right now high level meetings and phone calls have been going on between Abuja and London on how to reverse the present status quo” so we were told by a source, who maintained that Aisha is on top of the game as ‘a virtuous woman, protecting the interest of her husband.’