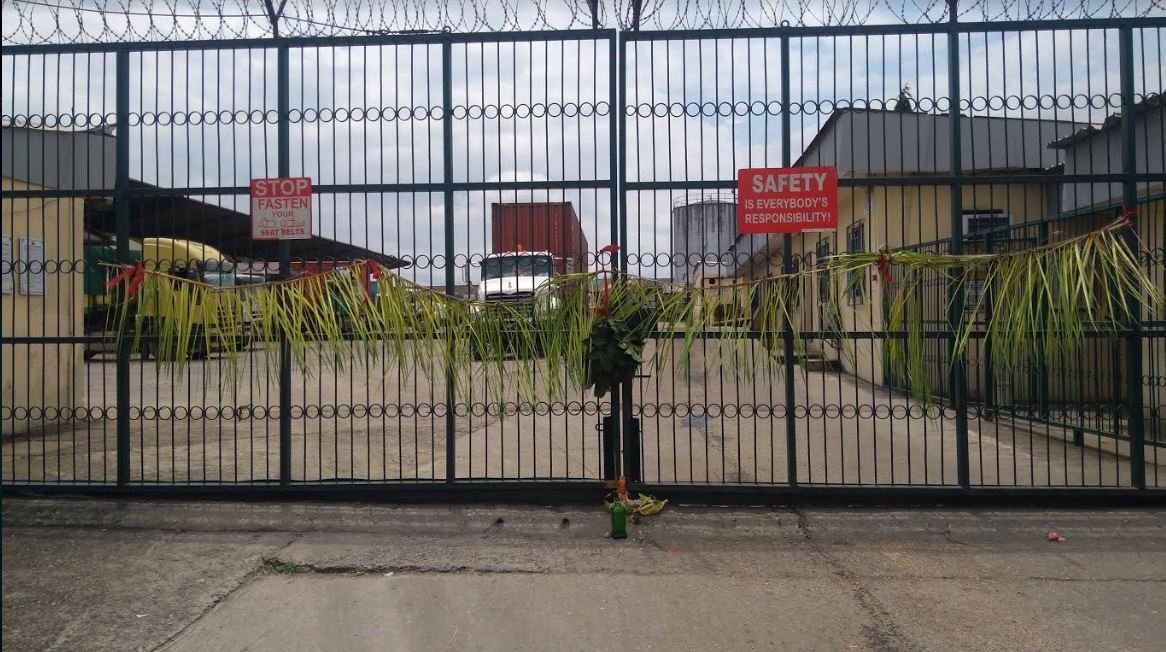 Residents of Calabar were stunned on Friday when they woke to the sight of charms placed on the gate of a multi-billion naira floor mill company along Murtala Mohammed highway in the Cross River capital.

The ‘juju’, made of yellow palm fronds and ‘Ekpe’ leaves, was hung at the entrance of the company by unknown persons said to be contesting ownership of the land.

An eyewitness, who declined giving his name, however alleged that the company has not giving attention to the plight of the people and that the host communities have not been given their entitlements including the employment of youths into better positions.

“In most cases, when this thing happens, it means the company was not giving adequate attention to the needs of the landlord communities and the people.

“In the case of this company, the youths are complaining of unemployment while the landlord communities are also saying that they have not been taken along,” the source said.

When we visited the company, it was observed that all staffers of the company were outside discussing the development in groups.

An Efik traditional title holder, Etubom Micah Archibong, who was seen at the premises of the company, lamented the situation.

He stated that as a member of the host community, he was not part of the group that placed the ‘juju’ in front of the company.

“I don’t know the cult group that put the injunction there. I want to know the people who put this thing… people always look for supremacy.

“I saw it last time and warned them. I told them that my grandfather owned this place. As I am here, I have the entire document pertaining to the area. This document shows that I am one of the rightful owners of the place.

“They needed to consult us. Since 1974 when we went to court, we won the matter, Kasuk community removed their hands and there was a document that was signed by traditional rulers.

“The document said that the great and great grand children of King Archibong should not be disturbed from enjoying the proceeds of the land. The land was given under a free hold.

“Chief Judge gave order in one of the traditional matter in court that everybody should not do anything in another person’s territory,” he stated.

Archibong said that he heard about the complaint of unemployment and other benefits which the management of the company have not given, but regretted that the aggrieved persons were yet to consult the elders.

“They should have consulted the elders. They did not know that this is my territory. It is Obutong that did this, they want to claim the land. They gave the land and they cannot come back to demand for it.

“This is trespass; we are the landlord community. We want to do thorough investigations to know the level of those involved in this sacrilege. I will not leave it at that.

“I am the grand child of the owner of the land, King Archibong, the third. He owned the entire floor mill land” he further stated.

When contacted, the Police Public Relations Officer Ms Irene Ugbo said she was yet to receive any report on the matter, stating that “nobody has reported this matter to us”.

The Rise And Fall Of Lawal Daura – Aliyu Tilde

CACOL outlines ‘numerous sins’ of sacked DSS boss, tasks Osinbajo on what must be done