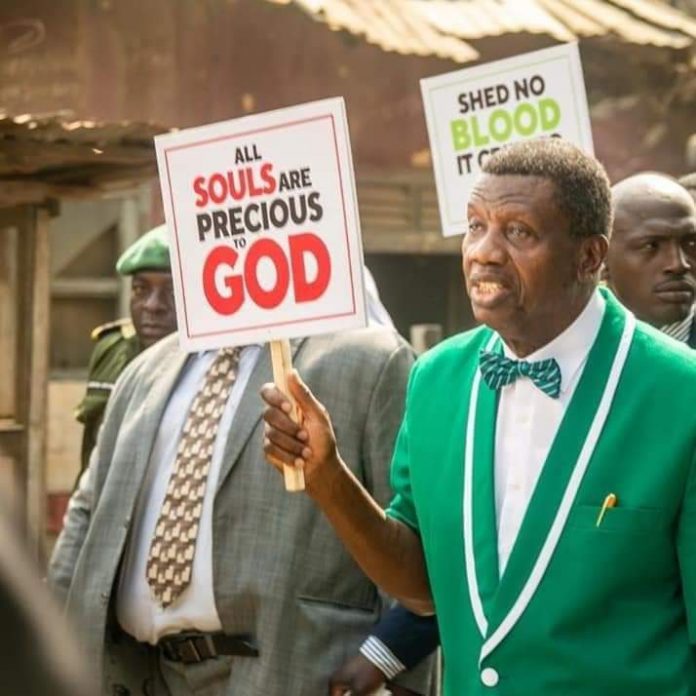 When the General Overseer of the Redeemed Christian Church of God (RCCG), Pastor Adejare Adeboye, left his accustomed pulpit for the streets of Lagos yesterday, it was to preach a different kind of message. It was to preach the message that the life of every citizen is precious and that it is worth protecting.

He demonstrated this stance as he led a “prayer walk.”

Adeboye called for an end to bloodshed in the country, stressing that whether a Christian or a Muslim, “every life is precious to God.” Shortly before the walk against insecurity, Adeboye, who said every soul lost to insurgency was precious to God, prayed that evildoers in the country should be exposed.

Pastor Kayode Adetola of the White Chapel Parish, Oshodi, said that the protest was an action following a directive by Adeboye to register displeasure at the high level of insecurity in the country.

The Archbishop of the Metropolitan See of Lagos, Alfred Adewale Martins, also joined other Nigerians in calling on the international community to assist in fighting insecurity in the country.

Speaking during the Feast Day celebration of the Blessed Iwene Tansi in Lagos, he expressed concerns over the continued killings of innocent people by the Boko Haram insurgents.

The Lagos walk was held as thousands of Christians in Kaduna, under the aegis of the Christians Association of Nigeria (CAN), protested against the Boko Haram insurgency which has claimed thousands of lives of innocent Nigerians and led to the destruction of property worth billions of naira.

The protesters called on the Federal Government to tackle the security challenges facing the country by changing incapable security chiefs, and fishing out and prosecuting the perpetrators and their sponsors.

The protesters, led by the Kaduna CAN chairman, Reverend Joseph Hayab, carried placards and converged on the Albarka Fellowship Baptist Church to express their dissatisfaction against the Federal Government over its alleged inability to end the insurgency and kidnappings.

A former secretary of CAN, Elder Samuel Salifu, said that since the government had failed to secure the lives and property of its citizens under President Muhammadu Buhari, “we have to cry unto God for vengeance against Boko Haram, kidnappers and their backers.”

A similar protest was held in Ekiti State as members of CAN trooped to the streets of Ado-Ekiti, the state capital, to march against the seemingly intractable insecurity. They condemned the beheading of Mr. Lawan Andimi, the Michika Local Government chairman of the association in Adamawa State, among other killings.

Addressing the protesters, the chairman of CAN in the state, Fr. Peter Olowolafe, described the security situation in the country as unbearable. He explained that the Christians decided to join others in the country to embark on the peaceful protest to express their grievances about the killings.

Other leaders of the association who addressed the gathering, including Joshua Orikogbe, Pastor Tunji Aina, Revd. Peter Akintade and Joshua Kolawole, lamented the high level of bloodshed in Nigeria.

Also, CAN members in Kogi State on Sunday marched around Lokoja, the state capital, urging President Buhari to take decisive actions to stop the killings.

Dr. John Ibenu, the state chairman of the association, made the call at a press conference held at the Chapel of Freedom Int’l, Lokoja, to mark a three-day prayer and fasting declared by the CAN national president, Dr. Samson Ayorinde.

Ibenu said: “We call on the president of the Federal Republic of Nigeria to act now to save lives. If he fails to act rightly and promptly, then posterity will judge him for standing with the enemy of the people. There must be no more sacred cows.”

He said that the CAN’s position on the deteriorating security situation had been vindicated even by President Buhari when his Special Adviser on Media and Publicity, Mr. Femi Adesina quoted the president as saying “I was taken aback by what is happening.”

CAN members in Osun State also expressed displeasure over the senseless killings across the country.

Christians from all denominations in the state yesterday embarked on a prayer walk from their places of worship before later gathering at the premises of the Methodist Church Nigeria, Isale-Aro, Osogbo, where prayers were said for the nation, churches and the state.

Addressing the gathering, Rev James Asani condemned the murder of the CAN chairman in Adamawa State and other Nigerians by Boko Haram insurgents and asked Christians to intensify prayers against insecurity.

In an interview with The Guardian during the walk, the Public Relations Officer of CAN in Osun, Pastor John Adeleke, called on President Buhari to “value human lives” and restore security to the country.

He said: “We gather on the instruction given to us by the CAN president that we should call on the Lord due to the insecurity in the nation. So, we call on the Lord to deliver us and our people from every part of the nation. We have been fasting since Friday and we decided to end the special fasting with prayers today.”

In Benue State, the CAN said that the Christians had lost confidence in the government following the massive killings and the inability to tame the killers.

The chairman of CAN in the state, Revd. Akpen Leva, made the comment while addressing the congregation at the NKST Church, Makurdi.

In Ondo State yesterday, the CAN urged President Buhari to resign over his inability to secure Nigerians and their property.

The CAN chairman, Rev John Oladapo and other notable clerics condemned the high level of insecurity. Addressing the gathering, the Catholic Bishop of Ondo Diocese, Jude Arogundade, decried the failure of the Federal Government to curtail insecurity.

Arrest of christian bomber, mockery of CAN rally – MURIC