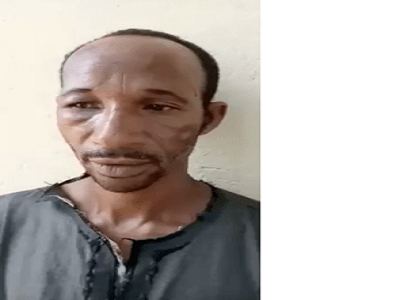 An alleged kidnap kingpin, Bello Abdul, 40, alias Yellow, has confessed to murdering over ten persons and abducting more than 50 victims on the notorious Abuja-Kaduna highway.

He spoke after he was arrested on Tuesday evening by operatives of the Police Intelligence Response Team (IRT).

Yellow was arrested at his hideout in Niger State by detectives, who have been on his trail following allegations of operating an armed robbery, cattle rustling and kidnapping syndicate that spanned across Katsina, Zamfara, Kaduna and the Federal Capital Territory (FCT) Abuja.

It was gathered that his gangs, which had mainly young boys were responsible for over 150 kidnappings and several murders along the Abuja-Kaduna highways and Kajuru.

A source, who hinted on the arrest, told our Correspondent that seven AK47 rifles were recovered from Yellow, adding that the suspect had countless others yet to be retrieved.

He said: “He confessed that he used to buy the AK47A rifles at N50,000 each and he has so many of them. So far, we have recovered seven from him. He used to buy ammunition in containers.

“This man is a dangerous suspect. He has been on the wanted list for a long time and we have been trailing him. Each time he was located in an area, he would run to another location. He controls so many gangs and his network goes as far as Zamfara and Katsina. But finally he has been caught.”

In a video where Yellow was being questioned by IRT operatives, the suspect confessed to have killed over 10 people and kidnapped more than 50.

The suspect who spoke Hausa said: “Yes I am married with five children. I was in Niger State. I was in Kajuru before but I moved to Niger in Iyamadamakwa. I live in Kara.

“I operate along Abuja-Kaduna road. I use small boys and those from my village in Maidaro. My boys are in Katsina and Zamfara. They are in nine places.

“I used AK47 rifles and I bought them N50,000 each from one Yaro Alhaji at Kajori. I buy like a container of ammunition. A single ammunition is N1,000.

“I have killed like 10 people. I killed one because the family insulted me on phone when I called them. Others were killed because their families did not pay ransom. I have rustled about 200 cows.

“I did all these things before but I have stopped them now. I have calmed down. If I call my brother Alhaji Abu, he will bring those weapons I used for kidnapping.”

One Of Deadliest Sets Of Criminals In Nigeria Arrested -Nigerian Army