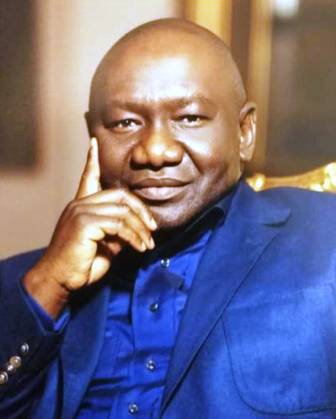 The National Crime Agency of the United Kingdom, The Crown Prosecution Service (UK) alongside other foreign-based defendants and the Economic and Financial Crimes Commission (EFCC) have been dealt a huge blow in the case against Aiteo Boss, Billionaire Benedict Peters. A High Court sitting in the Federal Capital Territory, Abuja, on Monday June 25, 2018, ordered the parties to maintain the status quo until the hearing of the main issues in the case.

Benedict Peters demanded $5billion in compensation, for what he describes as a series of unlawful and fraudulent conspiracies allegedly organised by the EFCC, AGF, the National Crime Agency and Crown Prosecution Service (UK) and individuals, Helen Hughes, Stacey Boniface, and John Bavister, “to expropriate by intimidation, assets, properties, monies to which he is legitimately entitled.”

In suit number FCT/HC/CV0536/17, the court has heard that properties belonging exclusively to  Benedict Peters were wrongfully included in a list of properties alleged to belong to Mrs Diezani Alison-Madueke, the former Minister of Petroleum in Nigeria, and that despite abundant evidence showing that Peters owned the properties, the defendants maliciously and deliberately continued to suppress the information with the intent not only to permanently deprive him of the properties but to destroy him as well as his business interests.  In the proceedings, which has been described as falling within the “fraud of Carousel Tort”, the plaintiff seeks judicial protection and compensation.

According to an Abuja based Constitutional and International law expert who doubles as the Coordinator of the group called Lawyers in Defense of Human Rights and Justice, Barr. Melchizedek Zaro: “This ‘Fraud of Carousel Tort’ case, being the first of its kind in this country, will open a new vista in the Nigerian, and indeed, African legal system that will set the tone in protecting citizens from racially-biased tribulations originating from neo-colonial vultures who are interested in pursuing certain agenda to satisfy their bigoted lusts. It is indeed, a welcome development in the history of Nigerian legal jurisprudence that will form a precedence for legal students and professionals alike going forward.”

At the hearing which came up in courts on Monday, June 25, 2018 and monitored by media outfits, Benedict Peters asked the court to restrain EFCC and the UK-based agencies from “interfering/continued interference with the properties…either by way of criminal indictment, charge, interdiction, extradition or in any other manner infringing in the quiet and peaceable enjoyment of the said properties.”

This was in response to what appears to be a continuation of racially induced, religiously prejudiced, discriminatory and executive persecution by the UK, especially to deprive the plaintiff on the basis of questionable and frivolous “evidences”. Peters who has been involved in a number of litigation with the Commission has become the subject of sustained investigations over the last few years despite the fact that he has consistently stated that there is no basis or evidence to support such continuing prejudicial interest in him. Curiously, many active persons such as John Bavister who originated this sham have prematurely ended their careers. Whether the long arm of the law will eventually catch up with them up is only a matter of time.

Mr A.T Gazali, Counsel to the AGF, challenged the court’s jurisdiction, arguing that the defendants were entitled to the protection of sovereign immunity. He also told the court that Peters had instituted a number of other cases which covered the issues he was asking the court to decide upon. Globally renowned human rights lawyer and Senior Advocate of Nigeria, Chief Mike Ozekhome, who led a team of lawyers for Benedict Peters asked the court to reject the objection as being misconceived because it was based on the erroneous belief that the Benedict Peter was trying to set aside orders of the UK court.

Apart from the EFCC, the foreign agencies and individuals who are defendants in the case retained the services of the AGF as their Counsel in the matter.

The EFCC was neither present nor represented in the court.  The Defendants were also not ready to proceed because their lawyers were not prepared. Chief Ozekhome complained to the judge, arguing that the purpose of the Benedict Peters’ application was to ask the court to protect him from the prejudice and hardship that EFCC’s continuing actions were causing him until the issues in the case were tried by the court.

After listening to the arguments of both counsel, the court made an order enjoining the parties to maintain the status quo. By this order, all the parties in the suit are now compelled to refrain from taking any further step or embarking on any activity or action that relates to the subject matter of the suit till preliminary objections are disposed.

The court’s ruling implies that EFCC and all parties concerned should henceforth refrain from further activities and let the court do its job of weighing all evidences and determining the facts of the case.

The judge consequently adjourned the case to a date to be communicated to the parties.