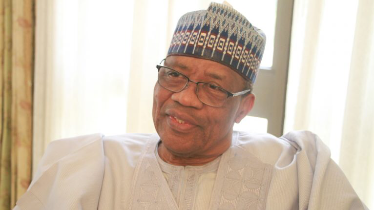 Former military president, General Ibrahim Badamasi Babangida, has suggested that the next president of Nigeria come 2023 should be in his 60s because of the nature of the work of the country’s leader.

Babangida spoke during an exclusive interview with Arise Television on Friday morning.

Babangida, popularly known as IBB, said one of the reasons Nigeria has refused to progress and achieve the dreams of the founding fathers was because Nigerians no longer believed in the future of their own country.

Although Babangida did not mention any names as ineligible for the nation’s number one seat, he however suggested that individuals in their 60s should be the focus of Nigerians as potential presidential candidates in 2023.

Babangida said he was confident that the nation is endowed with both human and natural resources, hinted at a few individuals, whom he said were in their 60s, had the capacity to become president and could effectively run the country.

The former leader, who accused the Nigerian people of creating and at the same time, destroying their own country, identified bad leadership as yet a major reason for the socioeconomic challenges facing Nigeria.

Talking about the presidential hopefuls he had in mind, IBB said they were persons in their 6os with contacts across the nation and who had been traversing the geo-political zones marketing their acceptability and capacity.

“I have started visualising a good Nigerian leader. That is, a person, who travels across the country and has a friend virtually everywhere he travels to and he knows at least one person that he can communicate with.

“That is a person, who is very verse in economics and is also a good politician, who should be able to talk to Nigerians and so on. I have seen one, or two or three of such persons already in his sixties.”

But when asked if the person could emerge victorious in the 2023 presidential election, the Minna-born former military leader said, “I believe so if we can get him.”

Reiterating his belief in the future of Nigeria and urging Nigerians to remain patriotic, Babangida, who claimed to feeling good as he was about to turn 80 years, with gratitude to God for sparing his life, advised Nigerians to go for the person that has what it takes to transform the country when the times

OPINION: The next President of my dream – IBB