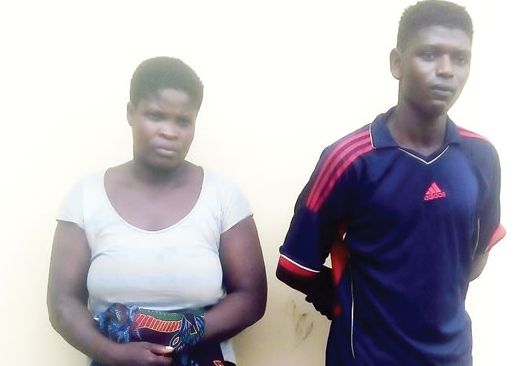 The plan of a Togolese lady, Idowu Dado, and a Chadian, Abdullahi Mohammed, to start business ventures through proceeds of kidnapping has landed them in detention.

The suspects were arrested by operatives of the Zone 2 Police Command, Onikan, Lagos, while plotting to kidnap a 15-year-old girl in the Ilasamaja area of Lagos.

26-year-old Dado, who was married with two children, contacted Mohammed, 26, who worked in a sachet water factory owned by the girl’s father, Mike Ogbuachara.

The duo then co-opted Ogbuachara’s security guard, Peter Okechukwu, into the plot.

The gang reportedly planned to demand N10m as ransom for their victim.

However, Okechukwu was said to have leaked the secret to his boss, who then alerted the police.

The two suspects, who were arrested by detectives, were paraded before journalists at the Zone 2 Command headquarters, Onikan.

Okechukwu said Dado promised to give him N2m if the plan succeeded.

“The following day, she said she wanted us to kidnap my boss’ daughter. She said she planned to demand N10m as ransom and if my boss refused to pay the money, we would kill the girl and sell her body parts.

“Because I was not comfortable with the idea, I went to tell my boss and he asked me to play along and videotape the discussion.

“I went back to meet her and agreed to the idea. When I asked what my share would be, she said she had a gang and we would be five. She said we would share the money N2m each. I told her to introduce me to other members. She said one of them was working with my boss in the factory. She didn’t tell me his name. She promised to call me later so we could all meet in a hotel to perfect the plan.”

He explained that he continued to update his boss every time he spoke with Dado.

Okechuwkwu said he was surprised when the suspect suddenly cut off communication with him.

“I went to see her and asked about the meeting. She began to threaten me, saying if I ever leaked the secret, she would kill me. I was scared,” he added.

The guard said he started monitoring the moves of Dado, who lived beside the factory, adding that he advised his boss to report to the police before it was too late.

The factory worker, Mohammed, said he was deceived by Dado because they both were of Togolese descent.

He said, “My mother is a Togolese, while my father is a Chadian. I met Dado after joining the factory three months ago. We only talk once in a while. She called me sometime in March and said she wanted us to kidnap my boss’ daughter.

“She said I should not bother myself much because she would arrange two other boys to join us and after doing the business, we could return to Togo to enjoy our loot. She said each of us would get N2.5m. She promised to involve the factory’s security man. I did not see her again until I was arrested.”

Dado, however, denied the allegations, saying Mohammed was the leader of the gang.

She said, “Mohammed came to meet me and said they delivered over N800,000 to his boss every day and asked if the man would feel any pain if we removed N10m from his account. I said I did not know.

“He suggested that we should kidnap the man’s daughter and I agreed. He promised to arrange boys to do the job. I went to meet the security man to seek his opinion and he agreed to join us. When Mohammed learnt that I had informed the security man, he became angry and said the man didn’t know how to keep secrets.”

The mother of two children, who claimed to be a hair dresser, said she planned to start a business with her share of the ransom.

The spokesperson for Zone 2 Police Command, SP Dolapo Badmos, said investigations revealed that Dado was the leader of the gang.

She said, “It is a case of attempted kidnap. While Mohammed is a Chadian, Dado, the brains behind the kidnap, is from Togo. Mohammed lied that he was a Nigerian and used fake names, until his real identity was uncovered.

“The AIG Zone 2, Kayode Aderanti has ordered that discreet investigation be done. We are working on getting their sponsors and we will bring them to justice.”