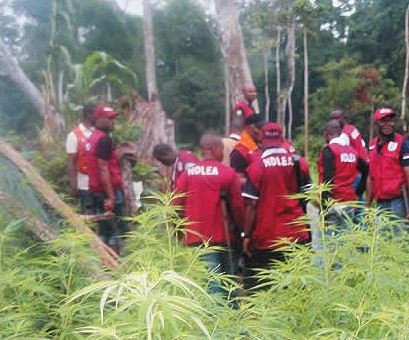 The National Drug Law Enforcement Agency (NDLEA), Edo Command says it has uncovered and destroyed two hectares of cannabis farms in the state.

Buba Wakawa, State Commander of the Agency disclosed that the farms located in Ovia North East and Etsako West Local Government areas were estimated to yield 248,088kg of cannabis plants.

He also said that the command had seized 452.36kg of substance suspected to be cannabis as well as Tramadol and Diazepam tablets. According to him, the achievements were recorded in the last one month.

He further said that no fewer than 11 suspected drug traffickers comprising five males and six females apprehended within the period would be charged to court.

He said that the suspects in their various statements have owned up to the crime of drug trafficking to make money. The commander lamented that the problem of drug abuse was posing a major challenge to families in the state.

“Most youths who are hooked on drugs have become openly disobedient to parents, dropping out of school and work, and becoming liabilities to their parents. Some even engage in stealing, armed robbery, cultism and other criminal activities,” he said.